The History of South African Swimming and other Aquatic Sports

Please join our Facebook group and contribute any information and photos you have. 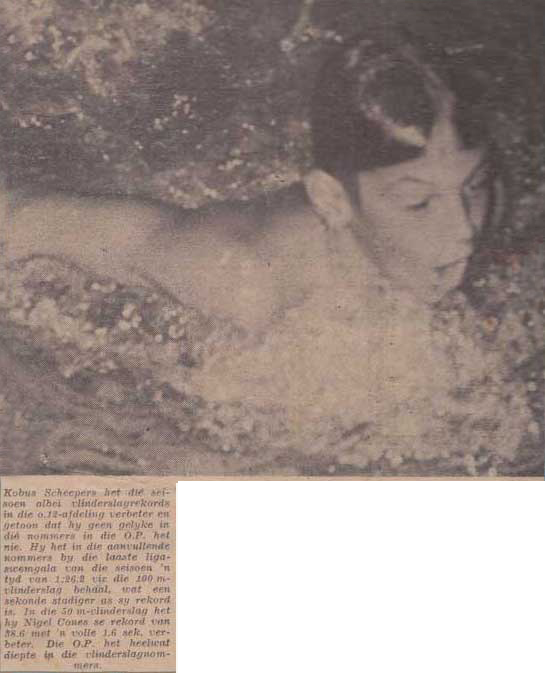 About me - Kobus Scheepers

I am the website author. I grew up in Port Elizabeth, in the Eastern Province of South Africa, where I attended Walmer Primary and Grey High schools. I started swimming with coach Peter Elliot and later moved to coach Tom Connell at Grey HS. I was awarded Springbok colours for the first time in 1978, and set a South African record for the 100m butterfly in 1980. I spend two years swimming in the USA between 1978 and 1980. I studied law and have lived in the UK since 2000.

Background to the project

I started my project in 1996 after Penny Heyns set a world record in Durban and it became clear that no one knew exactly when a South African had last set a world record in South Africa. Thinking that she might know the answer, I contacted the late Karen Muir, then working as a doctor in Harrismith, but she wasn't sure either.  I realized that there was no database of records for swimming in South Africa, and that much of the history had already been lost and forgotten. The new South African aquatic sports national governing body - Swimming South Africa - has a “history” of swimming in South Africa on its website, but their “highlights” start in 1964, and fails to even mention of the Olympic gold medal won by Joan Harrison in 1952.

Scope of my project

This project is two-fold. I have had to collect and publish the content and learn how to make a website (no small task!).

The context is southern Africa, which traditionally included South Africa, Rhodesia and South West Africa, which all competed as provinces. I also mention the former Portuguese colonies of Mozambique and Angola because of sporting contacts with those countries.

South African swimmers first took up scholarships at American universities since the early 1950’s. Freestater and Olympian Graham Johnston went to the University of Oklahoma in 1952. Today Graham is an American ISHOF honouree, where he is compared to Johnny Weissmuller as “the greatest swimmer” – because today he still sets world masters records!

I have also including former South Africans - like Lewis Pugh (UCT law student), Natalie Steward (born in Pretoria), Simon Lessing (godson of my mother-in-law) and Keri-Ann Payne (taught to swim by Johannesburg schoolteacher by Di Williamson) who medalled for Great Britain, and Sarah Poewe from Cape Town has won world championship titles for South Africa and Germany.

Disability swimming also features in a few places, although little has been recorded. Of our own Natalie du Toit put South African disability swimming at the forefront of international sporting news. Deaf South African swimmer Terence Parkin, who won a silver medal in the 200-meter breaststroke at the Sydney Olympic Games in 2000, never participated in the Paralympics as it does not recognize deaf swimmers as disabled.

The focus is mainly in activities I was involved in and have knowledge of, and therefore governed by the (white) South African Amateur Swimming Union (SAASU) - as the national governing body (NGB) from 1900 – 1992. However, I have looked for any relevant material, regardless of race, political origin, content or bias. I included any newspaper articles about activities of non-white swimmers, and I tried to contact members of those communities, although I received no replies from them. The extravagant claims about Derek Orderson - made in a film Breathe Again which documents how he was "one of the fastest swimmers in the world" could unfortunately not be substantiated.

The Research so far

Many aquatic sports websites list results and records, but my objective is to also tell the stories of all the people involved, through their own photo albums and articles (see the article about Jenny Maakal, written by her nephew), and her coach Jimmy Green from Pretoria – whose daughter kindly gave me the charred remains of Jimmy’s scrapbooks, burned when the old Pretoria pool was destroyed; and Dr Phillip Getz who has an extensive collection of memorabilia related to his father – former SAASU president Harry Getz. Few countries can boast an Olympian Princess – like Charlene Wittstock – Princess of Monaco.

Some articles were written for the site - like Jonty Skinner's contribution about his father - coach Doug Skinner; and Mark Jankelow's experiences with his coach George Jacobson at the Wanderers SC in Johannesburg, while many others who have kindly allowed me to use their photos.

Since I had been a swimmer, growing up in Port Elizabeth in the 1960’s, I had kept my own scrapbooks which I have shared here. My research includes many visits to the British Library Newspaper Archives in London, trips to Cape Town and Johannesburg, and Holland, to interview Dutch Olympic champion  Ada Kok, who toured South \Africa in 1967. I have also done much trawling the internet, locating and phoning people worldwide, buying related materials – like the delightful 1965 interview with Karen Muir, which I bought from ITN Source; collecting photos received from personal archives and personal scrapbooks donated by former participants or their families - basically any materials I have been able to track down while living (and working full-time) in London. The old SAASU archives produced their original first Minutes Book, which I was able to copy.

The first version of this website was a real mess – I could not even navigate it myself. I have now learned JOOMLA, which the current version is based on - which is why it is now searchable. It has taken some time for me to work out how the tech works! Thank you to everyone who has contributed - please continue to send me materials. I have (mostly) accredited materials written for the site, although a lot of it was copied from other sites.

Aside from the (literally) thousands of hours it has taken me to get this far, it has also not been cheap - including trips to SA and the Netherlands, and the British Library newspaper archive where I found the old newspapers (the British library charges 25p per photocopy!). Each page had to scanned and Photoshopped, and uploaded into an article.

Future work to be done

The work is obviously far from finished. I will continue to host the website and add content over time. I hope you have enjoyed the content, and This email address is being protected from spambots. You need JavaScript enabled to view it. if you have any to add.

COPYRIGHT: The site is entirely educational and non-commercial, so no copyright is claimed and most sources are not credited.

DISCLAIMER: I publish the information without any guarantees that it is always going to be correct.

CORRECTIONS: If any detail is incorrect, please let me know - I shall fix it!

REMOVALS POLICY: If you don't want your materials on the site, please let me know, and I shall remove them - simple.