PETER ELLIOT former Springbok swimmer from the Eastern Province and one of the best swimming instructors in South Africa is head of this well-known swimming family.

As an instructor he played a large role in the swimming success of his son Brian, Geoff Grylls, Neil Aldridge and Jonathan Reen. The four who all gained Springbok colours in the 1960's were by far the best swimmers that EP delivered.

Peter's wife, Sheila, supported his coaching endeavours, while Helen, Derek and Gregory, the other family members, were all top EP swimmers. Brian and Helen were well known instructors in their own right.

Peter recalls the tough swimming gala's between Muir and Grey while he was at school, with Muir winning the Clint-trophy for 13 years running.

Geoff Mandy, who represented SA in the Olympic Games in London in 1948, was along with Peter, a stalwart in Muir's swimming team. Peter speaks highly of the training they received under their swimming coach Arthur (Coxie) Harrow.

As a scholar, Peter represented EP in freestyle. He made his debut for EP in 1935 at the SA Championships held at the old swimming pool in North End. He came third in the 880 yards and fourth in the 500 yard races.

In 1939 he was awarded his Springbok colours when he competed in Durban against the Australian touring team. Peter was placed third in the 440 yard race. In 1942 Peter joined the air force when he returned to Uitenhage. He was in Rome for two years and represented the Mediterranean region. Geoff Mandy and Duncan Melville, were also part of the team.

Peter was 27 years old when he took part in the SA Champs in Pretoria in 1946. EP Management convinced him to represent them at the SA Championships held in PE the following year which would be his last appearance for EP.

Peter carried on taking part competitively in galas till the age of 31, and at that age, along with Ernie Nicholson, Alf Boliter and Paul Winer, set a new EP record in the 4x100 freestyle medley.

Springbok Shirley van der Poel was also coached under Peter. His son Brian made a name for himself swimming for the USA in 1966 and again with the Springboks in 1967, and Britain and Europe in 1968. 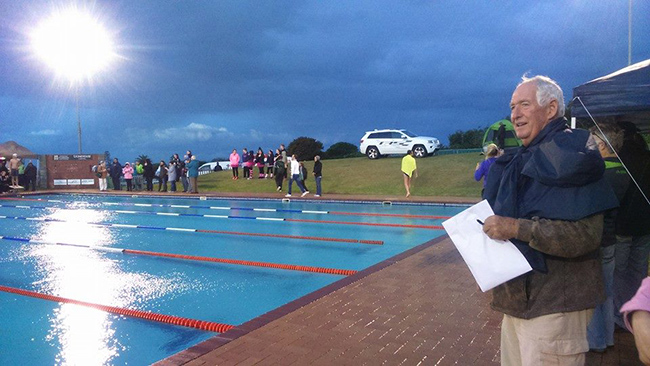 Coach Brian Elliot started his own club - the Aquabear Swimming Club - back in the 1970's. His father's club - Barracuda SC - was based in Walmer, while Brian set up an indoor facility at Pickering street in Newton Park.

1970 EPASA awards night. Brian Elliot next to his brother Derek Elliot to his right.