Swimming coaches have sometimes organised into Coaches Associations, where their names would be recorded. Unfortunately little evidence remains of these coaches associations, and the names and biographies of most coaches are unknown today. Below are links to a few swimming coaches:

Over the years a number of famous coaches have visited South Africa, like Americans John Harte (1937), Bob Kiphuth, Doc Councilman and Don Gambril (1960).

The coaches listed here are of no particular colour or nationality. Very little is known about the coaches in the non-white communities. The Pisces SC in Durban named Eddie Meth be the first black coach with a swimmer winning a gold medal at National Championship level. 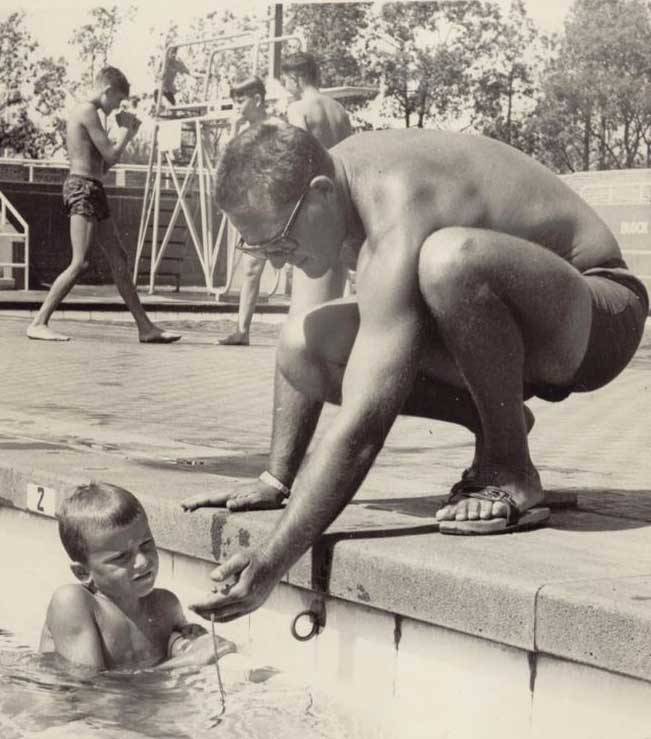 Many coaches follow their parents into the job - like Graham Hill and his mother Doreen (below). Other families that coach include Olympic Dean Price and his American mother Janet; Frank Gray and sons Simon; David and Nicky; Peter Elliot and Brian from Port Elizabeth; Britons Frank and Lillian Parrington in Rhodesia, and their son David, USA Olympic diving coach; Doug Skinner and USA Olympic swimming coach Jonty Skinner. There are many more families who have continued the tradition - if readers can provide details, their names will be added here.

Read  the stories of some leading South African swimming coaches.

Coaches are rarely mentioned in news reports - but here is an article that mentions a few of Natal's best.

Roland Schoeman, of Northern Tigers, who is based at the University of Arizona, smashed the South African 100m butterfly record with ease on Monday night.

He clocked an Africa record 52.73sec competing in the semifinals at the South African championships at King's Park pool in Durban.

The championships double as the Olympic trials.

His Arizona team-mate, former Free State champion Ryk Neethling now swimming in the colours of KwaZulu-Natal, smashed the 200m freestyle record, recording a world-class 1.47.37 and dragging Pietermaritzburg's rising teenager Darian Townsend to an Olympic qualifier in the semifinals. Local lad Townsend recorded an outstanding 1.49.57, which should see that he goes to Athens in August.

"I was hoping for a 1.46, but it was a good enough time considering that I had to work by myself up front all the way. I swim a lot stronger when I'm pushed by my opposition."

There was plenty of satisfaction for several of the home province's coaches as Wayne Riddin, Graham Hill, Alisdair Hatfield, Frank Gray and Margaret Martin all saw some of their charges making it to the medal podium over the opening three days.

Riddin saw 14-year-old Tanya Strydom snatch bronze in the 50m freestyle, an effort which will probably see her as the youngest medallist of the week - the championships continue until Wednesday evening - and has been Townsend's coach for many years.

Hill was able to share some of Riddin's glory, having monitored the progress of the former Maritzburg College star since the start of the year.

Hill, the Mr Price Seagulls coach, also had the satisfaction of taking a 1-2 in the 200m backstroke for women, with Melissa Corfe recording a 2.14.00, just a fraction of a second off the Olympic qualifying time, while Romina Armellini - swimming in the colours of Cental Gauteng - took the silver medal in the same event. Terence Parkin grabbed silver in the 100m breaststroke.

Martin's young 100m breaststroker, Ronwyn Roper, pulled out all the stops to grab the bronze, a feat matched by Hatfield's Jeff Norton in the 200m backstroke and Neil Versveld in the 100m breaststroke.

The coaches listed here are of no particular colour or nationality. Very little is known about the coaches in the non-white communities. The Pisces SC in Durban named Eddie Meth be the first black coach with a swimmer winning a gold medal at National Championship level.

A number of foreign coaches have visited