The story of Robben Island is a colourful one. The first Europeans to arrive there with Bartolomeu Dias in 1488 named it the Cape of Storms. Lying in Table Bay, the island was initially used by passing sailors as a source of food and building materials, and as a shelter in stormy weather.  Later it was as a leper colony, and famously also a prison for political exiles and convicts.

While the swim traditionally ended at the pier in Table Bay harbour, today the most swimmers land at Bloubergstrand.

While most of the crossings have been in the nature of marathon swims, in 1926 a race was organized by the Cape Argus, which was won by 15-year  old Peggy Duncan of Kalk Bay. 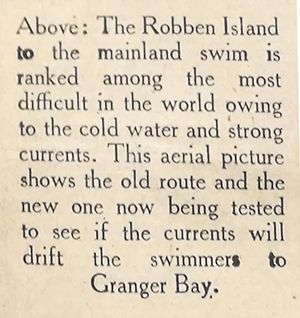 Swimming in Table Bay can be challenging. The current sweeps northwards  from the Antarctic waters, but despite reports of the terribly cold water, the temperature reaches 19 degrees Celsius in summer. Shark attack are an ever-present fear, although no open-water swimmer has ever been bitten there.

The earliest mention of a swim from Robben Island probably dates from a footnote in a VOC document, 28 Januarie 1690 Dagregister. It records that  a convict named Johannes Rijkman van Weij escaped by swimming to shore

On the 4th September 1909, an Englishman Henry Charteris Hooper succeeded in crossing Table Bay, after a challenge by the Sports editor of the Cape Argus newspaper. Hooper was a well-known local swimmer, having swum from Muizenberg to Simon's Town in False Bay. Hooper was also strictly amateur - he would get no financial rewards if he could swim cross Table Bay.

The next successful crossing was in 1926, when the Argus newspaper organized a race from Robben Island. The swimmers were had to be "amateurs", so no financial reward was on offer - just two silver trophies worth £25 each. The race was won by 15 year old Margaret Duncan. The third person to complete the crossing was Florrie Berndt, failed had to finish the race, but she succeeded a month later.

In 1932 the visiting English swimmers  Mercedes Gleitze achieved the first swim from Cape Town to the island, and the next day she swam back!

By 2020 swimmers were regularly completing the crossing, and local swimmer Theo Yach did it 108 times. Others have done double and even triple crossings to Blouberg in one swim, as well as swims to Cape Point and other landfalls along the Cape coast at Woodstock Beach, Mouillé Point and Three Anchor Bay. Today many swimmers complete the crossing to Bloubergstrand, which is officially 7,4km. In 2020 the record to Blouberg is held by Olympic and Paralympic swimmers Natalie du Toit and Troy Prinsloo. Her time of 1:35,00 (2009)was only 15 minutes slower than Prinloo's time of 1:23,53 (2013).  The Blouberg crossing has become an extreme-sports tourist attraction, with numerous of swimmers completing the crossing every year.

In 2018 Abriella Bredell became the youngest to swim from Robben Island to Blouberg at age11. Her route was the shorter 7,8 km route to Bloubergstrand in the west, rather than the longer route into Cape Town harbour.

From 1969 onward the number of crossings to, from and around the Island rapidly grew Swimmers set of from various beaches - Blouberg, Llandudno, Clifton, Melkbos and others. Some swam around the island, and others, like Steve Klugman, did a triple crossing. The full list can be seen here.