Eight South African long-distance swimmers are to set off, on Saturday, on an epic journey: a relay along the last 513km of the Orange River.

Funds raised will go to the Heart Foundation of SA to be used to train children from disadvantaged areas in the art of cardio-pulmonary resuscitation, more widely known as CPR.

The swim, never before undertaken, is being organised by Capetonian Andrew Chin who, with his seven team-mates, will take to the water of the unpredictable river at Onseepkans, just on the west of the Augrabies Falls.

They have only a few canoes and kayaks for backup.

Swimming in relay, the team hopes to complete an unprecedented 10 marathons in 10 days as they swim about 50km a day.

The air temperature will sometimes exceed 40°C, which would lead to any normal swimming marathon or gala being delayed or called off.

The swimmers will brave dangerous rapids, hidden sharp rocks, complex island systems and other unforeseen obstacles, in an attempt to complete a route until now only ever undertaken by kayakers.

Chin said that due to drought conditions, water levels are low and the river flow much reduced, making the swim slower and obstacles greater.

Swimmers will take to the water each morning at about 5am and should swim for about 12 to 14 hours. Swimming will end at about 7pm.

Out of the water, the swimmers' only rest will be in the searing heat.

They will also have to paddle their own supply-laden craft to the next overnight wilderness campsite where they will sleep under the stars.

At the end of the 10 days, they plan to leave the water and walk onto the beaches of Alexander Bay, having swum the length of the South African/Namibian border.

Chin, 34, a financial adviser who has completed the Robben Island crossing three times in the past two years, heads the group of swimmers aged between 28 and 46.

The most experienced is Vivienne Brown, who has completed at least 10 Robben Island crossings while the rest of the team are made up of:

A team of six South African swimmers is set to undertake a challenging 600km relay swim down the Orange River later this year to raise funds for and awareness of the Heart Foundation and to highlight the plight of South Africa's deteriorating rivers.

The swim - which gets underway on October 22 - is the second leg of a successful 500km challenge down the Orange River undertaken by eight swimmers in January 2004.

That 10-day journey took the swimmers from Opseepkans, just below the Augrabies Falls, to Alexander Bay.

This year the team will comprise only six members who will swim from the Lesotho border post of Tellebridge, through Aliwal North, Oviston and Oranje - ending in the Northern Province town of Hopetown, a journey of about 600km.

The swimmers will be accompanied by a Heart Foundation team who will educate the public en route about its childcare programme and undertake free testing for blood pressure, sugar and cholesterol, as well as provide counselling by a dietician.

Both the Orange River challenges are the brainchild of Capetonian swimmer Andrew Chin, veteran of a host of challenging long distance swims, who is keen to establish an adventure swimming club with the aim of raising funds for worthy causes.

"While this is another personal challenge for all of the swimmers, the main aim is to raise funds for the Heart Foundation which is doing excellent work to try to combat heart disease - a major killer in South Africa," Chin said on Thursday.

"At the same time, we want to use this opportunity to highlight the plight of some of our country's beautiful rivers which are under threat from pollution, erosion and general exploitation."

Chin hoped the swim - dubbed the Windhoek Light Orange River Challenge - would also be seen by authorities as an opportunity to come on board and "support our efforts to show how important it is to respect and protect our rivers".

As with the previous challenge, Chin and his team mates will swim in relay about 70km each per day over 10 days, braving rapids, hidden rocks and complex island systems.

The swimmers will take to the water around 5am each morning and swim in relay until shortly after sunset.

Six South African long-distance swimmers will undertake the gruelling last 800km leg of a three-phase relay swim along the length of the Orange River later this month.

The Orange River Challenge 3 starts on October 14 when the six will attempt in 10 days to complete their quest to swim in relay the entire length of the Orange River from where it enters South Africa from Lesotho, until it reaches the Atlantic Ocean about 1 900km away.

They have already completed 1 100km during two previous challenges, the first in 2004, and the second in October last year.

Now, the three men and three women athletes plan to complete their tough adventure by swimming from Hopetown in the Northern Cape for 10 consecutive days by which time they hope to have passed Upington.

This is the longest and most challenging leg of the event.

The six will swim in relay between 60 and 80km for up to 14 hours each day, paddling canoes when they're not in the water and sleeping under the stars on the river bank at nights.

Six extreme swimmers completing the final leg of their challenge to swim, in relay, the length of the Orange River have reached the Augrabies Falls near Upington, they said on Friday.

The swimmers reached the falls in the Northern Cape on Thursday afternoon after battling rapids and low water levels for three days, said one of the swimmers, Andrew Chin.

He said all the swimmers were bruised and tired after spending between 11 and 13 hours a day either swimming or paddling.

The six have been swimming sections of up to 600km of the Orange River over the past four years and began the final leg—the Orange River Challenge 4—in Upington on Tuesday.

“We are almost halfway through the final leg and just a few days away from completing our dream to swim the Orange River from where it enters South Africa, from Lesotho to the Atlantic Ocean, and it’s a great feeling,” said Chin.

He said the swimmers camped on the river bank below the Augrabies falls on Thursday night.

“The shallow water has slowed the swimmers who expect to complete the remaining 135km of their 1 900km challenge in Onseepkans in the Northern Cape by Sunday.” 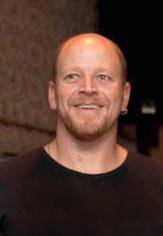 Extreme swimmers Ram Barkai and Andrew Chin (above) first whet their open water swimming appetite on the Orange River Challenge.  Characteristically, they did not simply dip their toes in the open water – then went full bore to the extreme.
Their goal: to swim down the Orange River with a team of swimmers and cover a distance of 535K in 10 days.

Staring from Hope Town in the Northern Cape Province, the team started off on Day 1 in a fast 8K per hour current.  On the first day, they swam 89K in 13 hours.

On Day 2, the swimmers entered the water at a rapid to start and then later slowed throughout the day to complete 59K.  The blistering heat and strong winds of Day 3 did not stop the team from completing 70K.  Day 4 was a 14-hour test of wills that resulted in a 75K swim.  Day 5 was relatively short – 11 hours where the team traversed 63K.

Day 6 saw the team slowed by oncoming 30-knot winds completed 35K in 8 hours as they rotated every 30 minutes.  On Day 7, s 60K day saw the swimmers navigating all kinds of rocks and trees in the narrow channels.  Day 8 proved a challenge with the 38°C (100°F) water temperature and thousands of biting insects. Day 9 resulted in a 43K swim in rocky venue while Day 10 was a 28K finale.

It was a challenge that took on a life of its own as it went along.  Dealing with each other and Mother Nature, the group of adventurers enjoying pushing themselves beyond what they thought possible.

The Orange River Dash is in aid of Swim4Sadie – a foundation created by Sadie’s parent to raise awareness to rare diseases and to assist families with children diagnosed with such.