Julia Catherine Vincent was born in Johannesburg on 13 August 1994. She matriculated at Kingsmead College in 2013, and became a student at the University of South Carolina in 2014. Competed in the 2010 and 2012 World Junior Diving Championships, the 2013 World Diving Championships and the 2014 Diving World Cup.

At the 2016 Summer Olympics, she finished in 29th place in the preliminary and did not advance to the semifinals.

Julia diving into the unknown 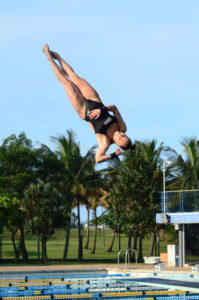 Participating at her maiden Olympic Games, Julia Vincent will be diving into the unknown in the women’s 3-metre springboard in Rio de Janeiro next month.

Eight years since South African last had a diver represented at the Games, Vincent will be hoping her somersaults, and twists would end with her disappearing into the water without much of a splash.

“Going to the Olympics means more to me than I can describe, it’s a dream come true, and it’s an incredible feeling knowing that all the pain, sweat and tears were worth it,” Vincent told Independent Media.

“I feel honoured to be able represent God, my country, my family and my friends on such an influential sporting stage.”

Vincent earned her place to the Rio first securing a slot for the country at the Fina Diving World Cup in Rio de Janeiro in February where she finished 28th overall before winning the national title in April to book her place to the global showpiece.

While Dreyer is better known for her failed attempt in Beijing, her performances four years earlier in Athens where she made it to the semi-finals had been largely forgotten.

Dreyer was the first South African diver since Craig Vaughan was knocked out in the preliminary rounds at the 1992 Barcelona Games to represent the sport at the Olympics.

Vincent, a public health student at the University of South Carolina, said her Olympic dream was fortified when she moved to the United States.

“I’m a very competitive person in and out of the pool, and I’m also a huge advocate for ‘the bigger your goal, the better’,” Vincent said.

“I knew that saying the words out loud, “I want to go to the Olympics” was a bold move but saying it aloud helped me believe in the dream a little more.”

“The moment I saw the diving boards I told my mom that diving was going to be ‘my thing’ and since that day I have never looked back,” Vincent said.

“I always wanted to go into gymnastics but I never did, and I figured diving is the same thing in water so I might as well give it a try.”

Vincent said her first goal was to complete the objectives as set out by her coach, Todd Sherritt, but ultimately hoped to reach the semi-final in Rio.

“My other goal for this meet would be to make it to the semi-final, which is the top-18, all while taking in the experience and having fun,” Vincent said.

“My dream was, and still is, fueled by being the diver that I don’t know that I can be. In other words, I am driven by the unknown. I want to see how good I can actually be.

“I want to be the best diver that I can be and being able to constantly work towards that is what ultimately fuels me.”

Wearing black wrist guards on both arms have become one Vincent’s trademark but is also serves as a reminder of the impact the body takes when diving head first into the water.

Since securing her place to the Games, Vincent has been working on a new dive ahead of the preliminary rounds at the Games on August 12.

“I recently competed at a meet in the States, the purpose of competing was to get one more competition in before the Olympics and it was also an opportunity to compete a new dive that I have been working on,” she said.

“I have never competed this dive before, and I was pleasantly surprised as to how it scored. I feel like I am in a good place going to the last month of my training.

“I’m ready to put in the last bit of work to make sure I’m ready for the biggest meet of my life.”

Vincent, 22, traveled back home to compete in the one meter and three meter diving competitions in Durban.  She has been competing at nationals since she was 15 years old and is undefeated in the last three years.

These recent victories continue her successful year.  She competed in the 2016 Rio Olympics, won the SEC title, and finished fourth at NCAAs.  But she says her victories in her home country feel special.

"It actually means a lot because there was a period in my diving career for years I was constantly hitting fourth place," Vincent said.  "So to be able to go back home now and be undefeated since I've come to college is a really big thing for me."

Vincent's success is significant because she started diving late, at 14 years old.  She picked up the sport quickly, but her USC teammate Jordan Gotro, also an All-American, says Vincent was raw coming into USC.

"When she came in here there was no way she was ready to make the Olympic team," Gotro said.

Vincent agrees, saying her biggest weakness was her mental game.

"Before I came in I doubted myself a lot and I wasn't quite aware what I could do with my diving."

"Her climb has been incredible.  She's gone from, you know, not even finaling in our conference to winning it," Sherritt said.  "But I will say this...talent wise, I've never had anyone as talented as this. She's the first person I've ever had that I truly believe can win an Olympic gold."

Vincent's success at nationally and internationally, specifically making it to the Olympics, has shown the South African swimming governing body it should view diving on the same level of importance as swimming.

Sherritt has traveled to South Africa with Vincent for her meets and was the 2016 South Africa head diving coach at the Rio Olympics and has seen Vincent's affect on the sport there.

"They were reluctant to even send divers," Sherritt said.  "[South Africa] now changed their posture from maybe sending people to now sending people all the time and that was a result of her making the Olympic team."

Vincent's next goal is to travel to Budapest, Hungary this July and win a gold medal at Diving World Championships.