Pretoria swimmer and diver brothers Gerrie and Ernie de Jong both attended the University of Oklahoma on athletic scholarships.

Ernie was born in Pretoria in 1934. He started diving at an early age and became South African Diving champion on springboard representing Northern Transvaal. At that time SA champion divers Willie Welgemoed and Basil Bowen were also based in Pretoria. After finishing matric in 1952 Ernst won a scholarship to the University of Oklahoma, where he joined his brother Gerrie de Jong and several other South Africans.

He was awarded Springbok colours for diving. As a coach he produced a number of South African champions including Vivian Breedt, Martin Lundie, Gina Laurie, all of whom were awarded their Springbok colours. 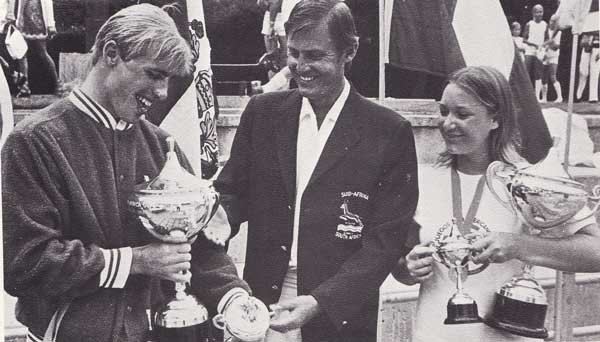 Ernst served many years on the NTS executive from the sixties, seventies and into the eighties. He has maintained his interest in the sport. He won 3 gold medals (on 1m, 3m and on platform) at the 2000 FINA World Masters’ Diving Championships in Munich. Last year he served as Jury of Appeal for the SSA National Age Groups, RSA Cup and South African Novices tournaments hosted by NTS Diving at the de Jong Centre. Ernst de Jong is still the Patron of the de Jong Diving Club which is the oldest independent diving club in South Africa. For his lifelong dedication to aquatic sport Ernst de Jong is nominated a life member of Northern Tigers Swimming

Over and above his interests in aquatics over the last six decades, Ernst has taken part in and achieved national colours in other sports such as fencing, shooting and archery too. He recently took up horse riding / show jumping and coaches his daughter, who is a world rated equestrian.

Ernst is an internationally renowned artist who has exhibited his artworks all over the world. He is well known locally for the gigantic fire screen at the State Theater. He designed the second definitive series of South African postage stamps. He designed the South African banknotes with the animals. He runs and founded the prestigious Academy of Fine Art in Pretoria.

Ernest is also famous for his artwork. 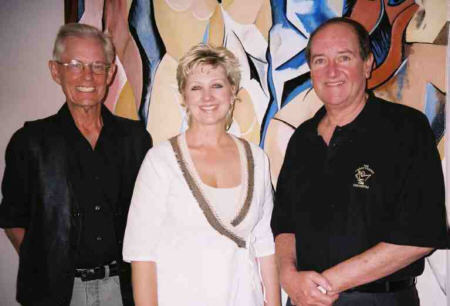 One of his greatest contributions to South African and NTS diving has been his visionary approach to the provision of diving facilities to Pretoria. Ernst and his brother, Gerry, saw the need for a standalone diving centre and proceeded to build the de Jong Diving Centre in Roper Street, Pretoria. Long before synchronised diving was the TV spectacle that it now is, Ernst saw the prospect of synchronised diving as a sport and erected the first ever twin 3m diving platform in Africa. Once the diving centre was fully operational it was donated as gift to the citizens of Pretoria. It is one of the best diving pools in Africa.

Gerrie de Jong swam at Oklahoma with fellow South Africans Graham Johnston, Lin Meiring and others. His brother Ernst de Jong joined as a diver at Oklahoma university in 1953. In 1954 Gerrie, with Lin Meiring and Julian Dyason, were an All American for his part in the Oklahoma medley relay team at the NCAA championships.

BUSINESSMAN Gerard (Gerrie) de Jong, the owner of Falcon Equipment and the founder member of the Sakabula Estate, has died.

Coupling academic and sporting prowess, Gerrie captained the University of Pretoria swimming team and made the “All American” collegiate swimming squad in 1954. He obtained a degree in business administration and bachelor and masters degrees in geology.

Gerrie and Barbara, his American wife (who also holds a Bachelor degree in Geology) returned to Pretoria in 1959 and staked their few rands into building and selling houses in Pretoria. Within nine years, Gerrie de Jong, who started as bricklayer, carpenter and plasterer, was Chairman and Managing Director of Gerrie de Jong Holdings, a company employing more than a thousand people and one that played a major role in property development and town planning in the Pretoria area in the 1960’s, listing on the Johannesburg Stock Exchange late in that period. The contract for the building of the Pretoria State Theatre was the culmination of his days in the building industry in the city of his birth.

In an effort to spend more time with their six children, Gerrie and Barbara sold their shares, and in 1972 moved to a farm they bought just outside Howick in the Natal Midlands. The drive and enthusiasm with which he built their construction and property empire was soon channeled into agriculture and the "De Jong Ranch". Just four years later their farm was a show place, and they owned 400 head of Santa Gertrudis beef cattle, the largest such herd in South Africa. Gerrie became President of the Santa Gertrudis Cattle Breeders Society in South Africa and also served on the committee of the South African Stud Book Association from 1978 to 1982.

In January 1976, after the Angolan crisis, Gerrie de Jong joined his local commando unit generating much enthusiasm among the men in his area and the numbers of volunteers grew to over 250 men. He became second in command, having attended several officers courses in Kimberley and Durban.

After running a dynamic campaign for the New Republic Party, Gerrie de Jong was elected as a Member of Parliament for Pietermaritzburg South in 1977. During his four years in politics he consistently spoke out strongly for the free enterprise system and on all matters concerning the farming sector. He finished his term of office as an independent Member of Parliament and chose not to seek re-election in 1981.

In l980 he changed his farming operation and added a large dairy herd to the ranching and farming enterprise. In l985 the de Jong Ranch was sold to the Hans Merensky Trust. Up until that time Gerrie was actively involved in organized agriculture. He served as chairman of the local Fresh Milk Producers committee, on the committee of the Lions River Division Agriculture Society and played the leading role in organising the very successful Tractor Parade that ran through Pietermaritzburg in 1984 - a protest that dramatically focused attention on the plight of the farmer in South Africa.

In 1985 Gerrie sold de Jong Ranch to Hans Merensky Trust. He purchased a small, bankrupt engineering works called Falcon Engineering and transformed it into a rapidly expanding manufacturing firm concentrating on agricultural machinery and specializing in grass cutting and haymaking equipment, known as Falcon Equipment. In 1989 President F W de Klerk opened the impressive new Falcon factory in Howick. In 1995 de Jong retired as Managing Director of Falcon Equipment, appointing his son-in-law, Peter Nisbet, as MD while he stayed on as non-executive Chairman of the company that grew to ever greater heights and entered into a partnership with an international Dutch Company, Kramp.

In 1995 Gerrie de Jong found himself retired but still burning with energy. Utilizing his profound vision - and his background in business, geology, building, property development, town planning and agriculture, he tackled a project right at his back door - literally! Gerrie approached his 11 farming neighbours just outside of Howick and suggested to them that they pool their land in exchange for shares in a company, Sakabula Estates (Pty) Ltd. The purpose of this amalgamation was to form and develop and build an 18-hole golf course with a residential estate surrounding it. The farmers not only agreed to do it, but a couple of them brought their expertise as well, and the successful Sakabula Golf Course, opened in 1997, was the result. In less than six years, Sakabula boasted the 10th largest golf club membership, out of the, then, 80 clubs in KwaZulu-Natal. Sakabula Country Estate proved to be a unique property development, made up of 92 smallholdings surrounding a golf course. The Sakabula Golf Club was sold in 2007.

Barbara and Gerrie moved back to Amber Valley Retirement Village in Howick - a large retirement village located on a piece of the 'De Jong Ranch' where they had raised their children 35 years previously. Gerrie passed away quietly there on the 4th September 2013 after suffering for many years with Alzheimers Disease.

Serendipitously, to both Barbara and Gerrie those years involved in the Howick Community with their six young children were the happiest and most fulfilling of their 58 years together. Gerrie is survived by his wife and five children; Renee de Jong Hartslief, Denise Nisbet, Tony, Michael and Michelle Blaauw. Chris preceded him in death, having passed away in 1995. 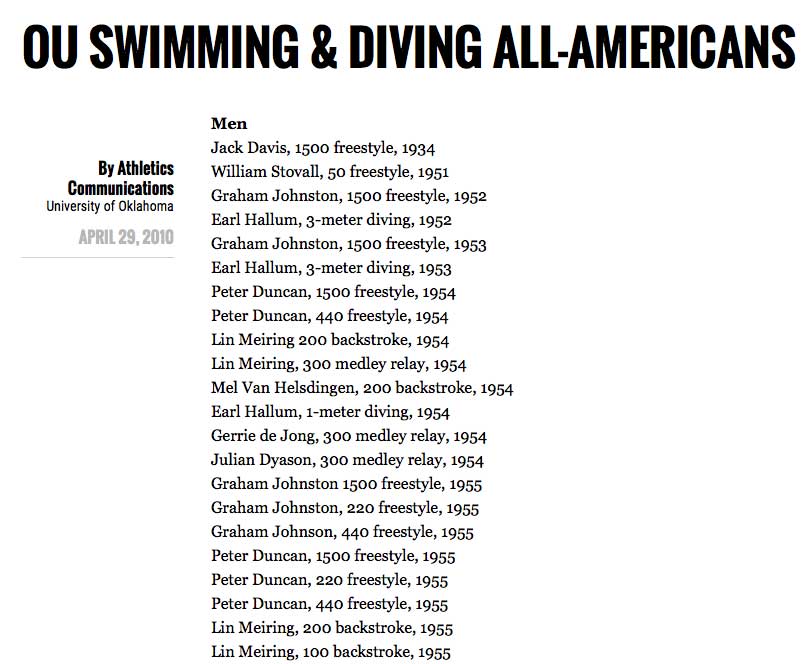 by February 1953 Gerrie was winning races for Oklahoma