Gillis, Vincent and Bouter on the women’s 1m podium.

While eight South African swimmers qualified for the FINA World Championships in Hungary later this year, the country’s top divers were making their own ripping statement at the King’s Park venue.

Gundry won the women’s 10-metre platform, Vincent the 3m and 1m springboards, while Bouter and Gillis triumphed in the 3m synchronised category.

The divers were treated to a brand new 3m board back plate and fulcrum, thanks to Duraflex International, which provided them with the best equipment to achieve their best dives.

Leading local diving coach, and a referee at last year’s Rio Olympics, Dominique Philippopolous, says it was a great week of competition in Durban.

‘Much to the delight of the junior divers, the senior divers attending various universities in the States returned to participate. This led to an incredible week of competition, and many amazing dives were performed which reflected in some amazing diving scores.

‘Julia was awarded the highest scoring dive, achieving a remarkable 84.00 points for her reverse two and a half somersaults (305C) off the 1m board in the women’s 1m final. Jaimee continued to impress the divers and the swimmers as they all flocked to watch her perform off the 10m platform.

‘These four girls were not only selected for the National Senior Squad, they also have all achieved the selection requirements for the FINA World Aquatic Championships to be held in Budapest Hungry in July this year.

‘With such inspiring diving, these girls inspired the junior divers to dream big and supported them all during their competitions. All looks promising for the future of diving in South Africa and we will certainly be sending our strongest team so far to the World Championships.’

Here’s what the four medal-winning divers had to say about their diving displays: 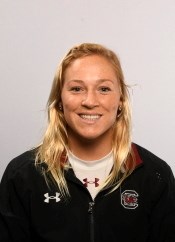 JULIA VINCENT (22 years old – University of South Carolina)
‘I was happy with the way this meet went, but there’s always more work to be done so, after a few days off, I’ll be ready to get back to work. We’ve just finished our collegiate season, so competing at nationals can be difficult at times because I’m exhausted from the season ,but I do my best to keep my head in the right frame of mind. The most important thing to me at any meet I attend, is to make the changes my coach has asked me to make while adjusting to new boards, and to stick to what he has told me to do before each dive. I know that if I do that, my dives will usually go well.

It’s not always easy to do, but I was able to do it at nationals and it led me to two personal bests and two gold medals. It can also be difficult coming from facilities in the US to the pools here in South Africa. It does take some time to adjust and to diving outdoors, but I really enjoyed being back diving in South Africa again, and I’m so proud of my teammates Micaela, Nicole and Jaimee as we all met the selection requirements to qualify for the World Championships.’ 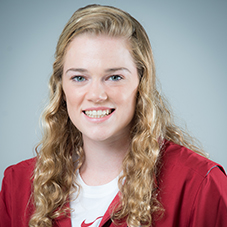 NICOLE GILLIS (21 – University of Arkansas)
‘I’m very happy with my performance and results from nationals. I went into nationals with a different mindset this year and it worked. I came second on 1m, third on 3m and first in the synchronised event with my partner Micaela. I’ve been selected to be on the senior national squad in all three events and I qualified for the World Championships in the 1m and 3m synchronised events. I’m very excited to go and compete for my country in Budapest in July and can’t wait to gain more experience on the international circuit. Getting to represent my country with three other girls on the team is an incredible opportunity.  I started diving when I was eight years old, so have been in the sport for 13 years. The mindset that I had for nationals this year was to be more confident in myself and my ability. I went in, knowing that I had trained hard leading up to Nationals and that my hard work would pay off as long as I continued to believe in myself.  Overall, I was very happy with my performance. There are a few things that I took away from all the events, and I’ll continue to work on my confidence as well as focusing on not getting too nervous under pressure.’ 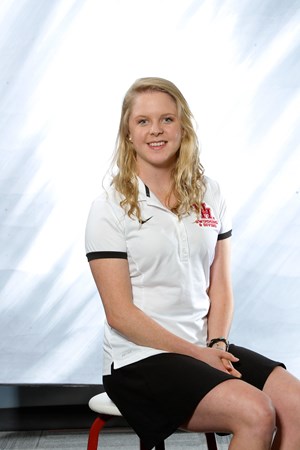 MICAELA BOUTER (21 – University of Houston)
‘I loved coming back to compete in senior nationals this year. The diving community is small in SA, but passionate about the sport, and it was so nice to come back after a long NCAA season in the US and receive so much support and encouragement from all clubs and provinces. This year I saw so much improvement in all of us US-based divers. Competing in the 1m and 3m women’s competitions was a little stressful because if I made one little mistake, I would be out of contention for the gold medal. On 1m I left my third dive, reverse 1.5 somersaults pike,  slightly short (under-rotated) for scores of 6.5s and it was enough to pull me down to third place, even though the rest of my list was good. On 3m I had a terrible Prelims, coming fourth with a score of 218. This was because I didn’t have my mental game on so early in the morning. After a good talk with my coach, my mind was better going into semi-finals and finals was my best competition of the day. I ended up second with a score of 295, a big improvement from the morning. Even though I didn’t end up taking gold, I was happy with the improvement I made through the day. I also achieved what I came to achieve: meeting all the qualifications for the World Championships. My synchro partner, Nicole [the two are pictured above], and I also ended up winning synchro and meeting the qualifications for that event too. Looking to the future, there are plans to compete in the Bolzano Grandprix (5-7 July ) and then World Championships. I’m so proud of Nicole and Julia who dove beautifully.’ 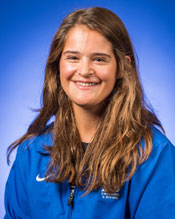 JAIMEE GUNDRY (22 – Duke University, pictured above)
‘I had a really great experience at Nationals this year. This academic year marked my final season of representing my university, Duke University, at a collegiate level. After a long season that definitely had some ups and downs, I was very excited to come and compete in Durban in the hope of qualifying for the World Championships. My competition went very well, and I’m extremely happy with how my dives went. I’m also very excited to have achieved the set qualification score and feel re-energised to get back to training hard in the next few months. I can’t wait to see what the future holds.’

All pictures courtesy of Dominique Philippopolous.

While 29 South African swimmers posted qualifying times for the 2018 Commonwealth Games the country’s top divers were also doing their stuff.

Of course, it must be remembered that eligibility is not an open and shut guarantee of selection.

The quartet of successful divers (all based in the United States) competed over four different events – the 3-metre synchronised event, the one, three and 10-metre individual events.

The fourth qualification came in the daunting 10m event in the form of Jaime Gundry.

South African diving will hopefully make a long overdue return to the Commonwealth Games. The last time the rainbow nation had representation at the ‘Friendly Games’ was also in Australia, 11 years ago when Jenna Dreyer was an outstanding fourth in the 1m final and ninth in the 3m final in Melbourne

The presence of the senior internationals meant that the next generation of stars had their idols back on the board and many great training moments were experienced as the seniors supported and helped and congratulated the juniors on their achievements.

This was also an opportunity for the juniors to compete against their idols and assess how much more work the needed to achieve the same standards.

All in all, it was a positive moment for diving in South Africa.

In fact so inspirational was it that 14-year-old junior Bailey Heydra even managed to edge out Olympian Vincent in the preliminary round of the 3m event.

Bouter stayed on in Africa to get some down time before the resumption of training and competition. She told Team SA from neighbouring Mozambique: ‘I was so happy with my diving in these CWG trials. Preparing for them was so tough because we were all finishing our final exams for the semester while trying to train intensely at the same time.

‘I came into the competition with the goal of simply qualifying for the games and ended up diving very consistently in all four of my individual competitions and in synchro.

‘Coming away with a first place in the 3m competition was so exciting and encouraging for me because I have been working on getting and perfecting new, harder dives this whole year and this was a good end to all that work!’

It’s going to be a busy time for 22-year-old Bouter on her return to the University of Houston.

Additional excitement for South African diving was the outstanding performances of the junior divers who entered the trials for experience, and while they didn’t achieve all the criteria, they certainly let the seniors know that they are close to if not capable of beating them.

SA's Gillis bleeds on diving board at Commonwealth Games 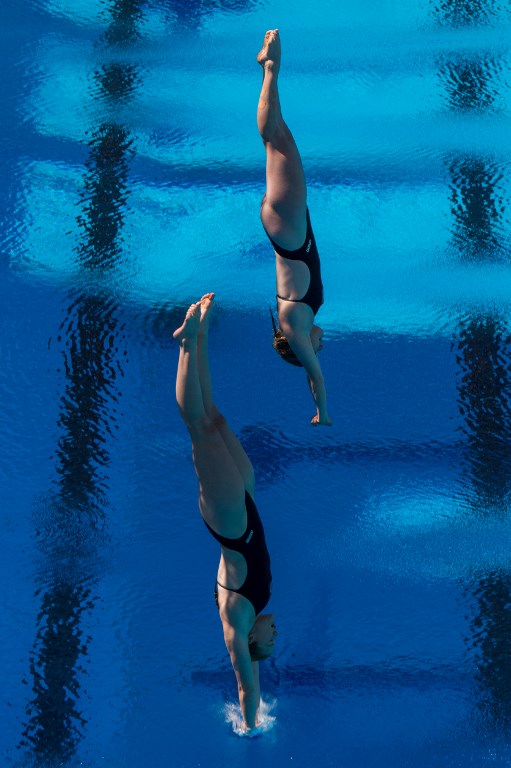 Nicole Gillis left a trail of blood on the diving board after accidentally slicing the big toe of her right foot minutes before competing at the Commonwealth Games on Wednesday.

Gillis and Micaela Bouter‚ both US-based students‚ had been called down off make-shift stairs leading up to the three-metre board for the synchronised diving competition in Gold Coast after a technical error in the scoring system had delayed proceedings.

“I was walking down the stairs and I slipped and somehow my foot got caught underneath a blue mat and there was a sharp thing‚” said Gillis‚ who got the toe plastered up by medics on the pool deck before they were summoned back.

“I guess my adrenaline helped because I didn’t feel it until my last dive. I’m hurting right now.”

On her first dive she walked to the end of the board to prepare. “I turned around and there were spots of blood all the way across the board and I was like‚ ‘poor divers’.”

Gillis headed to the hospital after the competition to get the wound properly checked out.

She and Bouter ended sixth out of seven‚ but they had the satisfaction of nailing the third-highest score in the final fifth effort‚ involving an inward two-and-a-half somersaults‚ a 56.70 that was topped only by the gold medallist Australians and English runners-up.

Gillis and Bouter‚ both 22‚ were competing for fun ahead of their more serious individual competition on Saturday‚ when they will be joined by teammate Julia Vincent‚ who participated at the Rio Olympics.

Based in different states — Bouter is in Texas and Gillis in Arkansas — they don’t get much chance to train together.

“We actually just trained when we got here‚” said Bouter. “We’ve competed together five times [including twice at the SA champs] but we only train together when we get to the events because we live so far away from each other.”

“We have a lot of potential‚ I feel‚” added Gillis‚ explaining they have to adjust their diving styles to try match each other.

“Our coaches tell us two different things‚” said Bouter‚ who initiates each routine by counting.

But Gillis said this wasn’t a problem. “We work well together.”