The popularity of these sports has had a considerable impact on the development of swimming. Swimming is a sport usually taken seriously while still in primary school but many, if not most, triathletes only began swimming as adults, when competing in triathlons.

Many South African swimmers have also excelled in biathle, triathlon, and biathlon. In South Africa, these include former Eastern Province swimmers Kevin Richards, and Mandy Dean who reached number two in the women's triathlon world rankings.

Not all South African multisport champions started as swimmers, although all obviously excel in the swimming element of these events.

There is an ever-growing variety of races that include swimming with cycling and/or running - as separate events or continuously. The swimming legs are held in a variety of venues - ranging from indoor pools to lakes and the open sea. 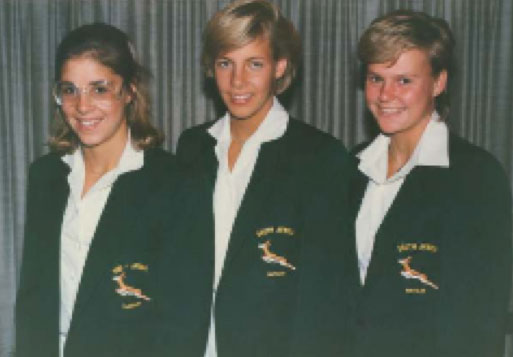 1986 - Lizelle Markgraaf, Amanda Markgraaf and Jeanine Steenkamp - three Springbok swimmers from the Eunice Girls School in Bloemfontein who also Springbok colours in Biathlon. Lezelle and Janine went on to swim at American universities.

Not to be confused with the Nordic sport with the same name, it is a uniquely South African sport that involves separate swim and run events, with points awarded for each leg. It is particularly popular in platteland schools where its is known by the Afrikaans name of Tweekamp. The 2019 Eastern Province Biathlon team above.

An outgrowth of modern Pentathlon, Biathle involves a continous run-swim-run race. The sport can be traced to the run-swim-run event in surf life saving.

Triathlon are multi-sport events which usually includes swimming, cycling and running. It is an Olympic sport since 2000, triathlons were first conceived in California in 1974. The event is held over various distances and terrains. Some events combine canoeing or use mountain bikes.