Inter-schools’ sports is an important element part of South African culture. Rivalries date from the early 20th century and have become even more popular in the era of professional sports. Annual events will include 700 or more pupils travelling to a rival school for a day's intense competition at all levels across many disciplines.

The history of schools in South Africa include attempts of British colonial governors attempts to Anglicize Dutch/Afrikaans children. This led to the creation of a dual-language system after the Boer War, with Afrikaans schools focusing mainly on rugby and netball, rather than swimming or water polo.

Post-1994 has seen a big change in aquatic sports at school level, with water polo growing into a dominant team sport for both boys and girls. Scholarships and recruitment have become big business, as schools work to promote their brand and increase revenue. School sports is also highly policitised, with government enforced quotas used in all team selections.

The history of schools and their swimming pools is a key element to the history of aquatic sports. These are grassroots sports, where elite competitors have to start training at a young age - in primary school.

Until the Union of South Africa in 1910, the four provinces administered their schools independently. As a result, there are noticeably different traditions and cultures in each. One obvious element is the creation and maintenance of facilities at both public and private schools.

International tours were rare, and mostly took place during the 1970's and 80's. The 1973 SA Schools team in Rhodesia. 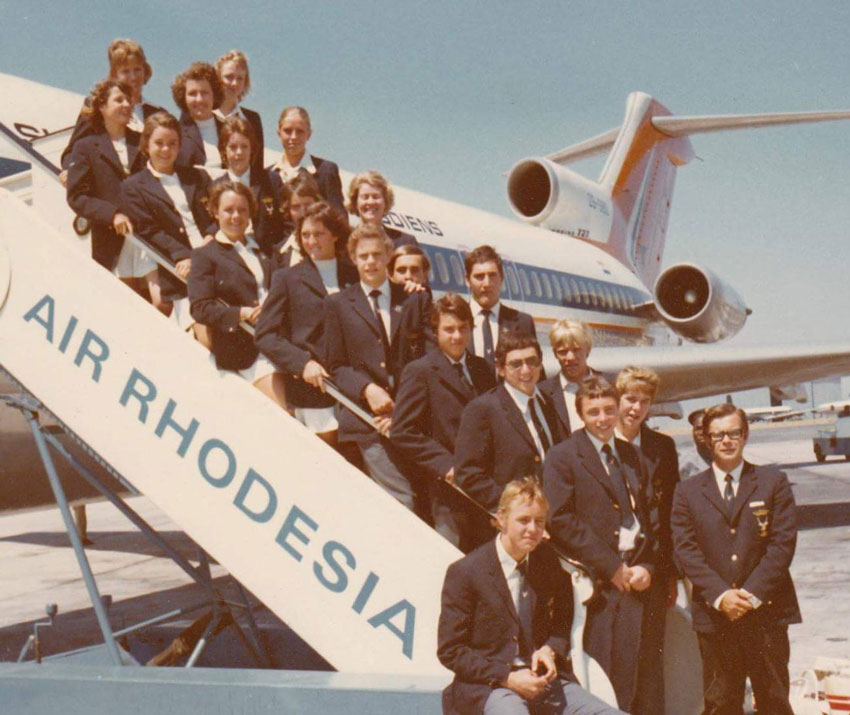 The oldest existing schools are all western Cape platteland schools, dating from 1738. Of the current top performing aquatic sports schools, Muir College, Wynberg and Paul Roos were all established in 1822.

The schools are grouped in the original provinces due to the impact of their historical locations had on their design and development. The large areas and long distances between centres also meant that schools tended to compete locally more often that nationally.

This list of schools that participate in aquatic sports is under development. Unfortunately most relevant information has not yet been located.

The best source of current South African School sports informnation today can be found on the SA Schools Sports website.

Click HERE on the map and zoom in to see many of the school pools today.

The Grey school was founded at Port Elizabeth in 1856, at the behest of the Governor of the Cape Colony Sir George Grey. He was also responsible for founding the famous Grey College in Bloemfontein, as well as the Auckland Grammar School in New Zealand. Grey High has produced a number of Springbok swimmers including Brian Elliot, Geoff Grylls, Kobus Scheepers, Andre Kotze  and world record holder - Peter Williams.

Today the focus is more on water polo, as the school converted it's 55 yard swimming pool into two 25m meter pools - one indoor, and added an third, Olympic size, water polo pool. This article from the Eastern Province Herald is dated 23 March 1923.

School's sports is particularly vulnerable to the government interference.

Young swimmers were the biggest losers this week after the national schools’ swimming championships were cancelled because there were too few black participants, Mark Skea, a former national swimmer, coach and parent has said.

“When will the bureaucratic administrators focus on the important issues, like the swimmers, and not on their inflated egos?” Skea, whose child would have participated, said.

The gala was set to take place at the Kings Park swimming pool in Durban yesterday and today. Top swimmers from schools in South Africa and other African countries participate in the yearly event.

Parents, who had already organised accommodation and transport to Durban, said they were only informed the gala had been cancelled on Thursday.

Some of them are now considering sending their children abroad to pursue their swimming careers in and for other countries. One parent has approached swimming federations in the US and Australia, while a German school has shown interest in another.

Paena Galane, spokesperson for the sport and recreation department, said that an agreement was reached with stakeholders in May last year that there would have to be 50/50 representation in school swimming for the department to continue its ­support.

“They asked for another year to continue with white swimming programmes, but the department is keeping to the agreement that 50% have to be development swimmers. “They continued on their own with the 99% white championship. This is why it wasn’t a part of the department’s calendar.

“In the spirit of sport development, we want to see more representative swimming teams before we will become involved again.”

Gerhard Labuschagne, a father from Gauteng, said: “It cost us as parents money to register our children for the provincial heats. We have also already booked ­accommodation in Durban and it costs nearly R10?000 for both parents to attend a gala like this one.

“Most swimmers are also dependent on bursaries from various schools. Those who don’t have bursaries are forfeiting getting colours from their schools.

“What do you say to your child who really wants to swim for South Africa, but is being forced to find their fortune overseas because of this?”

Braam van Niekerk, the father of a 12-year-old top swimmer, said he couldn’t even imagine what affect this ­decision would have on a child who had trained for the championships for a year.