Rivers play a minor role in the aquatic sports history of southern Africa, although some of the earliest aquatic sports events took place in rivers. The British colonisers brought with them a fondness for gambling, which in England often resulted in swimming races held in rivers and the ocean - and they did the same in southern Africa.

The dry climate in most of southern Africa inhibits the existence of large rivers suitable for aquatic sports activities. The few large rivers include the Orange and Vaal rivers which flow westwards to the Atlantic, mostly through farmland. In the east of the country the Limpopo and Zambezi rivers flow to the Indian ocean. Eastward flowing rivers are crocodile infested, although that did not always stop the sports. Rhodesians were  known for swimming races across the crocodile infested waters of lake Kariba.

The early history of aquatic sports in Rhodesia records that: The first aquatic meeting in Rhodesia was held in Salisbury in March 1891, and the Makabusi river. During a much needed rest at the Makabusi River, Major Johnson scaled a nearby kopje to see how far they were from Mt Hampden.

The Makabusi river was to play a key role in the history of Rhodesia, as it was the location of it's capital, established on 13 September 1890. when a decision was made to select the spot on the Makabusi and to call the site Salisbury.

The oldest existing river race in South Africa is the River Mile held at Redhouse in the Swartkops river near Port Elizabeth since 1927. In recent years the Mile has been moved to the nearby Sundays river, due to high levels of pollution in the Swartkops.
Below is a photo from 1895 - taken in Redhouse.

Karin Pretorius of Northern Transvaal who the 1958 South African Half-Mile Championship in the Vaal river, as well as the half-mile champion in the Buffalo River at East London.

Eastern Province swimmers at the Buffalo Mile - Springbok Brian Elliot Helen, his sister Helen Elliot, Alan Cooper, Ian Walter and Paul Nance. They were all members of the Baracuda SC and coached by Peter Elliot in Port Elizabeth.

The small resort town of Parys lies on the Orange Free State side of the Vaal river. The completion of the railway sideline to Parys in 1905 meant that Parys had suddenly become more accessible to the public and this in turn led to the growth of the town as a holiday resort and industrial centre. The town was now being marketed as The Pride of the Vaal and city dwellers flocked by train to the lush green river banks and special swimming facilities and accommodation provided by the Village Management Board of the time.

On the 12th December 1967 Don Shepherd of Johannesburg set off to swim the length of the Vaal river from Standerton to Vereeniging. Shepherd was already famous: On 12 May 1964 Don Shepherd, a 48-year-old gold miner Johannesburg, set out from the Los Angeles City Hall to begin a solo coast-to-coast run across America. At the time, this was the longest run in the world by an amateur runner. Just like his swim later on, he did the run without support.

Five intrepid open water swimmers have conquered seven of the estuaries in the Eastern Cape to raise awareness around the poor state of our country’s rivers and to highlight the urgent need to restore them. The athletes set off from the mouth of the Kromme Rivier in St Francis Bay on Saturday 14 October and completed their final 2017 swim at the mouth of the Nahoon River in East London on Saturday 21 October. During the course of the week the swimmers covered daily distances of between 5km and 11km in the Kromme, Gamtoos, Sundays, Kariega, Kowie, Keiskamma, Kwelera, and Nahoon rivers.

“Swim for Rivers” involves a small group of athletes that is attempting to swim major rivers in each of South Africa’s nine provinces. The intention of Swim for Rivers Eastern Cape, the fourth event of this extreme swimming challenge, was to focus specifically on estuaries, which are the critical link between our freshwater rivers and the sea, and to convey the message that rivers, estuaries and oceans are interconnected and entwined, meaning that pollution of one implies pollution of all.

The team consisted of five seasoned open water swimmers Andrew Chin, Mandy Uys, Joy Roach, Sean Murray and Nicky van Nierop. While the swimmers have described the experience as “a rather epic week” they returned inspired by the warmth and enthusiasm of the locals; in awe of the wildness and beauty that they encountered on some of the estuaries; and optimistic that broken rivers can be fixed with the appropriate interventions, funding, and time. During their swims, they found silted river mouths and plastic pollution in most of the rivers, with a strong smell of diluted sewage present in a couple of them. They also endured challenging weather conditions throughout the week including very cold temperatures, rain, and a pumping head wind at times.

The swimmers’ programme included visits to local schools – including some participating in the WESSA Eco-Schools programme – where they interacted with around 800 learners over the week. During these visits the swimmers were able to share a message of the vital importance of our rivers, how they function, and the role that everyone needs to play in looking after these precious natural resources. Learners were also shown how they can use citizen science to monitor their own rivers and were given a short lesson in water safety.

The swimmers also met with three groups of WESSA Tourism Blue Flag Beach Stewards along the way, which created a great synergy with these passionate young people, who are promoting coastal environmental education as part of the three-year coastal tourism and youth development project they are participating in, implemented by WESSA in partnership with the National Department of Tourism.

In addition to raising awareness and encouraging individual corrective action, the 2017 Swim for Rivers for Life athletes hope that their initiative will spark debate about what the relevant authorities and public can and should be doing to manage and protect our rivers. 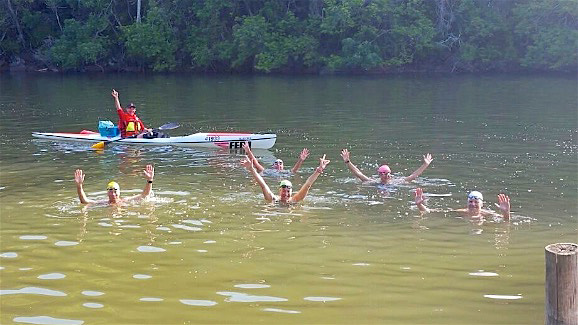 The end of the swim on the Kwelera River.

WESSA strongly supports this ongoing initiative, which is in line with the organisation’s aim to promote public awareness and participation in caring for the earth. One of WESSA’s key objectives is to promote the health of our strategic water catchments and rivers by actively monitoring and reporting their state.

ABOUT SWIM FOR RIVERS FOR LIFE

Pioneered by Cape Town-based swimmer Andrew Chin, the Swim for Rivers for Life initiative involves open water swimmers taking on South Africa’s rivers one province at a time to highlight the degraded state of our waters, while creating awareness in youngsters of their own power to restore river health and to be waterwise. In 2015, when Chin and Toks Viviers swam 200km in the Wilge River in the Free State over a period of 10 days. In October 2015, Chin and fellow swimmer Henko Roukema took to the rivers again, however high water pollution levels and exceptionally low flows forced them to abandon their quest to swim the length of the Berg River. 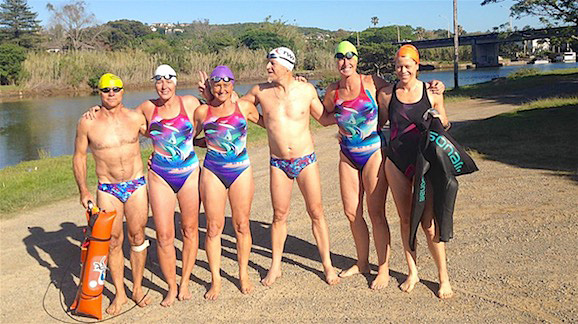 The start of the Nahoon River swim, from L to R: Sean Murray, Nicky van Nierop, Mandy Uys, Andrew Chin, Joy Roach and Kim Murgatroyd (a local doctor who swam this river with them).

Their goal had been to swim the Berg from source to sea, but the polluted water caused such illness in the team that they were forced to call off the swim after completing 135km of the river’s 294km length. In 2016 Chin partnered with Mandy Uys to swim a 70km section of the Orange River in the Northern Cape and to interact with over 1,000 school pupils along the way. The Eastern Cape swim is the fourth event of this extreme swimming challenge and plans are underway for a 2018 event in KZN. 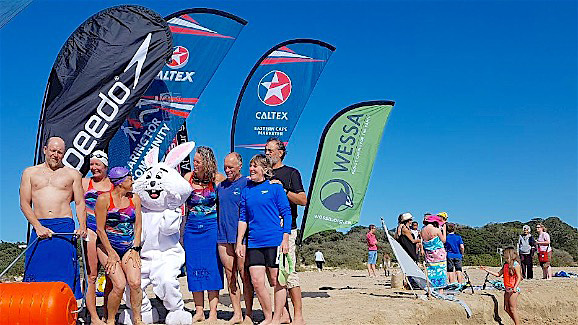