The Kings Park swimming complex was opened in 1988.

The hot and humid climate in Durban has led to the construction of numerous municipal, school and private swimming pools. As a result, Natal has always been a major force in South African aquatic sports, winning the inter-provincial Ellis Brown Trophy more than any other province.  Coaches like Ma Finlayson, Alex Bulley, Frank Gray, Doreen Hill, Alasdair Hatfield, and many other coaches have developed the strong swimming culture in Durban.

Durban has produced champions in all the aquatic sports disciplines.

The Durban Corporation, as it was called, built numerous swimming pools, including the saltwater pool at North Beach. Later known as the bEach Baths until renamed after coach Rachael Finlayson in 1963.

Watersports on the beaches of Durban include surf lifesaving, which includes an element of swimming. More recently the ocean is also used for open water events like the Dolfin Mile series of races.

A part of swimming at Natal's beaches is the ever-present danger of a shark attack.

As early as 1907 the Durban City Council decided to erect a large semi-circular enclosure, approximately 180 m in diameter, to protect swimmers from the surf and strong currents and against shark attack. The enclosure was constructed of steel piles with vertical steel grids placed between them.

Since 1952 shark nets have been used to protect swimmers in Natal.

Today there is some resistance to shark nets from conservationists.

The loss of bathing facilities at Fynnlands Beach through harbour development and the council’s decision to build a public swimming pool in Durban North had Bluff councillor Spanier Marson fuming in March 1956. “What has the Bluff got? No (tarred) roads, no pavements and no halls. Now that the Tesoriere Bath is established in Congella, Bluff residents are entitled to the facility of their own swimming pool,” said Marson. “An ideal site would be the Lieut. King Park which would cater for the Bluff population of almost 8,000.”

The council’s beach committee subsequently prioritised a construction list of public swimming pools. The Bluff was second on the list after Durban North. The list included pools for coloured and Indian residential areas and formed part of capital expenditure for the 1956/57 budget (Mercury, 21 March 1956).

Fynnlands pool green, closed due to stolen pipes The pool was closed earlier in the year for an upgrade. 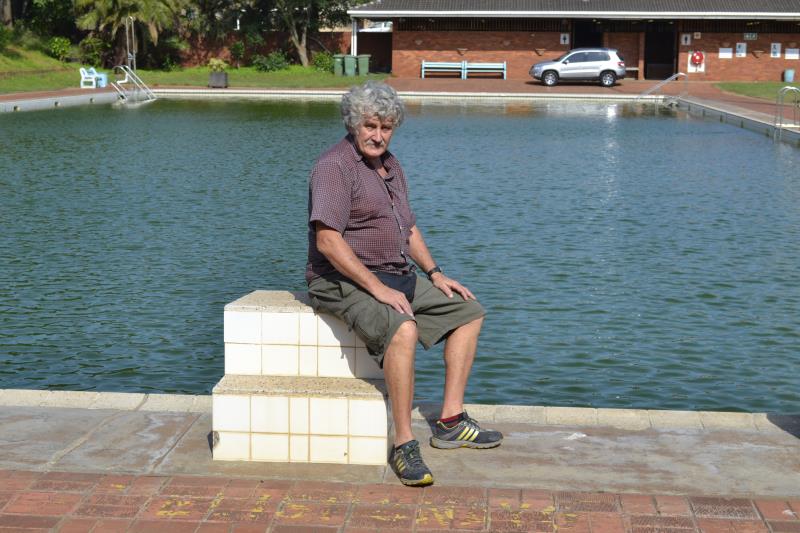 THE Bluff Alliance (BA) is querying why the Lieutenant King municipal swimming pool in Fynnlands has been left to ruin with no access for community members.

The pool on the Bluff, which was closed earlier in the year for an upgrade, is now green and community members have been told they can’t enter.
“I have heard the pool is in this state because copper pipes were stolen in July. Why have these not been replaced? The BA is disheartened by this and questions need to be answered.

The fences also have holes in them and you can see where people are sneaking in to steal pipes and other items. What if a child sneaks in through the fence and drowns? Is that what it will take for someone to stand up and take action?

HISTORY OF PROTECTION AGAINST SHARK ATTACK IN KZN

Warm water (19-26°C), a mild, subtropical climate and wave-lapped beaches have long attracted visitors and residents to the sea at Durban and the adjacent coastline of KwaZulu-Natal (KZN). Unfortunately the pleasure of such visits has occasionally been marred by shark attack.

As early as 1907 the Durban City Council decided to erect a large semi-circular enclosure, approximately 180 m in diameter, to protect swimmers from the surf and strong currents and against shark attack. The enclosure was constructed of steel piles with vertical steel grids placed between them.

In 1928 the enclosure was demolished as a result of the damage it had suffered from the often rough surf, extensive corrosion and the high cost of maintenance. In the next 11 years there was little evidence to suggest that shark attack was a problem in KwaZulu-Natal.

his changed in 1940, when five attacks took place along an 8 km stretch of coastline to the south of Durban, between Amanzimtoti and Winklespruit.

In 1943 the Durban beaches became the focal point for shark attack. Between 1943 and 1951, Durban experienced 21 attacks, seven of which were fatal. Desperate for a solution, the city authorities adopted a system that had been successfully used in Australia since 1937. There large-meshed gill nets anchored seaward of the breaker zone at several Sydney beaches not only trapped large sharks but also reduced the incidence of shark attack.

In 1952 seven gill nets, each 130 m long, were laid along the Durban beachfront. In the first year of operation 552 sharks were caught in these nets, but, more importantly, the desired effect was achieved and no serious shark-inflicted injuries have occurred since at Durban's beaches.

Unfortunately the resulting safe bathing conditions did not extend to other holiday resorts on the KwaZulu-Natal coast, particularly those south of Durban, where a series of attacks between December 1957 (since known as the infamous Black December) and Easter 1958 claimed the lives of five people in 107 days. These incidents had a devastating effect on the coastal tourist industry because they led to a mass exodus of panic-stricken holidaymakers.

In response to the public outcry, and fearing financial disaster, several coastal towns tried erecting physical barriers in the surf zone to enclose their swimming areas. These unsightly structures, built from poles, wire and netting, could not stand up to the heavy wave action and were soon abandoned. Dedicated depth-charging by a South African Navy frigate is known to have killed eight sharks but probably attracted more sharks to the area to feed on dead fish.

The logical solution was an expansion of Durban's netting operations and in 1962 shark nets were installed at some of the larger holiday resorts to the north and south of Durban. At that time the Natal Provincial Administration created a statutory body, known as the Natal Anti-Shark Measures Board, now called the KwaZulu-Natal Sharks Board (KZNSB), which was "charged with the duty of approving, controlling and initiating measures for safeguarding bathers against shark attacks".

By March 1966 there were fifteen beaches with protective nets, maintained either by commercial fishermen or municipal employees. At this stage the KZNSB field staff worked in a supervisory capacity, but in 1974 the organisation began to take over the servicing and maintenance of net installations and by 1982 it was solely responsible for all shark netting in the province of Natal (now known as KwaZulu-Natal).