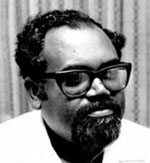 Morgan (Gonaseelan) Naidoo was born in 1936 in Durban.  He spent most of his young life at the FOSA TB Settlement, just north of the city. His father died when he was still young, and he was forced to leave school in grade 9 to find work to support his mother and two sisters.

Naidoo was the first Black person to present a radio broadcast on the then SABC’s English Service on Saturday midday in the sixties. He was a sports journalist on various Durban newspapers, including the Graphic, the Leader and the Post.

It was in his capacity as a sports journalist that saw him attend a swimming meeting at the David Landau Community Centre, in Asherville, Durban ( in the early sixties) and found himself being elected to an executive position of the provincial non-racial swimming structure.

By the mid-sixties he was either the president or the second in command at club, district, provincial and national levels in swimming bodies. Morgan was an executive member of the provincial Natal Indian Amateur Swimming Association in the late fifties, and was instrumental in transforming this organisation into the first non-racial swimming organisation in the province, with the formation of the Amateur Swimming Union of Natal.

He became the president of this organisation. Through his efforts, swimming was soon being promoted in several black townships (although at this stage, predominantly in Indian and Coloured areas around Durban).

In the mid-seventies, with increasing administrative duties at a national level, he stepped down as the chair of the provincial organisation. However, his links with this structure continued throughout his life.

In 1985, when the body was steeped in organisational conflict, he was called back to assume the presidency of the Amateur Swimming Association of Natal.  He continued in this position until his death in 1988.

The highlight of his term of office was when the province hosted the national swimming championships in February 1988.  Naidoo was the Tournament Director. This was widely acclaimed as being the best national event ever, becoming the benchmark for all the tournaments after his death.

In 1965, as president of the provincial structure, he led a delegation which met with various people from disadvantaged communities throughout the country to form the first non-racial national swimming organisation, the South African Swimming Federation (SAASwiF).

When the headquarters of this organisation moved to Durban in 1967, Morgan was unanimously elected president, a position he was to hold until 1982, when the organisation merged to form the Amateur Swimming Association of South Africa. As President of SAASwiF, Naidoo worked tirelessly to take swimming to the black townships. For the first time in the history of black people in this country, organised swimming was taking place in their townships.

The SAASwiF was avowedly non-racial, and strove to unify the sport within the country. Under his leadership, SAASwiF repeatedly held meetings with the "whites-only" South African Amateur Swimming Union (SAASU), led at one stage by a standing member of the National Party.

Despite verbal commitments to promote non-racial swimming in the country, the white organisation continued to abide by the racist policies of the state, forcing SAASwiF to embark on a separate strategy for its own recognition. Under Naidoo’s leadership, it accomplished this in two ways: it sought direct affiliation to the international swimming body, FINA, and simultaneously campaigned for the expulsion of SAASU from the international body.

In response, FINA sent a Commission to investigate South African swimming in 1972. Naidoo led the SAASwiF delegation to this fact finding mission. At the 1973 International Conference of FINA, held in Belgrade, Yugoslavia, the SAASwiF application for membership and the motion to expel SAASU was to be considered. Naidoo was appointed to represent the Federation's position at this meeting. However, the Nationalist Party Government denied him a passport.

Nevertheless, the memorandum presented to FINA, largely the result of his endeavours, led to the subsequent expulsion of the exclusively white SAASU from world swimming in August 1973. He spent many years working for Distillers Corporation, as a salesperson.

However, when he was banned in 1973, the company terminated his services. Consequently, he was forced to seek work in the insurance sector. Naidoo and his wife, Maya, were refused permission to travel to Brazil when he won a prestigious trip to an international meeting of the insurance sector.

The state reacted in its usual vicious manner, and Naidoo was banned from November 1973 until November 1978, by the Minister of Justice, P C Pelser, under the Suppression of the Communism Act. The Minister denied that this was at all related to his sporting activities. A measure of the esteem in which he was held, is that for the next five years he was unanimously elected President of SAASwiF, in absentia, at every annual general meeting of his organisation.

He resumed his position as the chair on the lifting of his banning order in 1978. As part of his efforts, he arranged, jointly with Samba Ramsamy (former President of the National Olympic Committee of South Africa (NOCSA)), then coach of the Crystal Palace Swimming Club in London, a six week coaching trip for the top five swimmers from SAASwiF. This was the first time that black swimmers had the opportunity to experience international exposure, participate in international competition and enjoys the benefits of an international coach.

By the end of the seventies, after countless attempts to engage with their white counterparts, Morgan and his leadership accepted that the way forward for swimming in the country was through unification of Black swimming. As such, SAASwiF engaged in serious discussions with the South African National Amateur Swimming Association (SANASA), an organisation formed in the late seventies, catering for aquatic sport in African townships particularly in KwaZulu-Natal, the townships of Gauteng and Western Cape.

Morgan played a leading role in the unification of these two non-racial, but predominantly black swimming organisations in the country, resulting in the Amateur Swimming Association of South Africa (ASASA) in 1982.  He was elected its first Secretary.

Despite demands for him to assume the presidency, he deferred this honour to Monathebe Senokoanyane, the national president of SANASA. Monathebe and Morgan were a formidable team that became the powerhouse of the new organisation, spreading its wings to all areas of South Africa.

For the first time in the history of swimming in South Africa, national swimming championships were being held in African townships – the first in Galeshewe, Kimberley in 1982. Morgan held this position of Secretary General until his death in 1988, and following the equally untimely death of Monathebe in 1983, was forced to be the primary driver of the fledgling organisation. Although an administrator at a national level, he did not cease his activities at a community level (apart from the period when he was prohibited from doing so through his banning order), which included the formation of clubs in various disadvantaged communities, the running of learn-to-swim campaigns for schoolchildren at community pools.

In September 1970, Naidoo was part of a Conference of non-racial sports organisations which led to the formation of the South African Council on Sport (SACOS), at which he presented a paper damning white businesses and their support for white/racial sport. He organised, almost single handed, various campaigns to advance the cause of non-racial sport. When Mainstay, the alcohol company cold shouldered the SA Soccer Federation in their sponsorship, he organised a boycott of the product, under the banner of the Committee Against Racial Discrimination in Sport (CARDS). In 1981, when the all-white Springbok team toured New Zealand against the international moratorium, he organised several campaigns under the Committee Against the Springbok Tour, 1981 (CAST 81).

The South African Non-Racial Olympic Committee (SANROC) based in London received most of its information from Naidoo for the preparation of their activities on the international arena. Naidoo received considerable attention from right wing extremists (and possibly racist government instigated) forces. His car was petrol bombed, his home was attacked in the early hours of the morning by unknown gunmen in March 1979, and he received several bomb threats at home.