SOUTH African swimming faces the difficulty of trying to keep athletes involved in the sport after they’ve left high school. This week’s South African Swimming Championships had an adolescent feel, particularly among the women competitors. Looking at the numbers, it is quite staggering how few females remain in the sport after the age of 20.

Only 15 senior women took part in the championships, while the men didn’t fare much better, with 64 swimmers between the ages of 20 and 30 diving into the King’s Park pool in Durban. The women’s events were dominated by teenage swimmers, with 14-year-old Rebecca Meder emerging as the de facto ag-bearer of the new and youthful generation.

Before the final day of swimming yesterday, Meder was on her way to winning a record ve gold medals at the championships, having won the 1 500m, 800m, 200m freestyle, and the 200m individual medley, and finishing second in the 400m freestyle. Tatjana Schoenmaker, 19, is also one of the country’s biggest female hopefuls after she became the first South African woman since 2013 to qualify for the Fina world championships.

While it’s encouraging to see promising women emerge from the doldrums of recent years, the concern now is how to keep them in the sport and see them reach their peak and be competitive at an international level.

On the men’s front, the usual suspects, Chad le Clos and Cameron van der Burgh continue to lead the way in South African Olympic star Chad le Clos in action during the 100m buttery event at the National Aquatic Championships at Kings Park on Friday. swimming with the Olympic gold medallists qualifying for the world championships to be held in Budapest, Hungary, in July.

Rio Olympians Douglas Erasmus and Brad Tandy also cracked the nod in the 50m freestyle, taking South Africa’s tally to ve individual A qualifiers. Whereas the women are producing young talent, the next generation of male swimmers seems to be missing in action, with the exception of 2015 Youth Commonwealth Games star Zane Waddell. Lack of depth in SA men’s talent pool is a worry 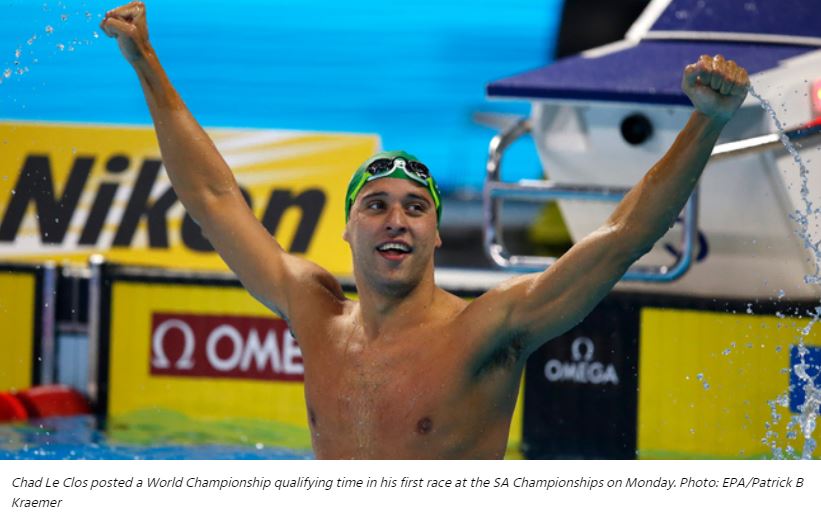 THERE were no surprises as swimming stalwarts Chad le Clos and Cameron van der Burgh posted world qualifying times on the first day of the South African Swimming Championships in Durban.

Van der Burgh got the 100m breaststroke time out of the way in his semi-final when he touched the wall in a time of one minute, 00.07 seconds (1:00.07) booking his place to his sixth world long-course championships.

“Getting the job done, that is the most important thing, I am just happy to qualify in a year of changes,” Van der Burgh said.

“It is nice to know that I can juggle the two, do the business and the training, but now going forward to the world championships I will have to put the business a bit on the blackfoot,” he said.

“If you want to be competitive you have to make sacrifices, so probably over the two to three months I will have to put the business down a bit and start working towards the world champs.”

Le Clos got his week off to a stellar start when he raced in the colours of Western Cape for the first time posting a qualifying time in the 100m freestyle racing in the 4x100m freestyle relay.

The multiple Olympic medallist touched the wall in a time of 48.64 seconds, dipping below the qualifying time of 48.93secs.

Meyer stopped the clock almost two seconds short of the word qualifying time in the 400m freestyle when he touched the wall in three minutes, 49.55 seconds (3:49.55). He managed to take off a big chunk off his previous life-time best of 3:51.57.

The 19-year-old said the goal was to slash at least another two or three seconds by the end of the year but the distance ace expected to break the national record in the 1500m at the weekend.

“That really sets me up for the 800m and the 1500m coming up which are my main two events, it was a second off my goal time but it was a good race and I feel good,” Meyer said.

“I’m really training hard for that 1500m. The main goal is to get under 15 minutes to try and get that national record.”

Meyer will be looking to slash his personal best my more than 12 seconds when he goes after Heerden Herman’s national record of 14:57.88 he set back in 2010.

The Bloemfontein swimmer, Zane Waddell, is one of eight swimmers to have qualified for the FINA swimming world championships in Budapest later this year.

The 19-year-old, who is currently studying at the University of Alabama in the USA, told OFM Sport that swimming for one of the top colleges has definitely improved his swimming.

“In terms of how America has helped in my swimming – coming from the facilities we have in South Africa and then going to the USA where they have a collegiate swimming system with proper gyms, free indoor facilities and access to a nutrition team and medical staff – that overall access helps to put you in a position to achieve what you want to achieve.”

The Grey College old boy who is more renowned for his backstroke added that he would like to qualify for more events, but is more than content to compete in just the 50m freestyle.

“I’m very happy with the events that I have qualified in. I’m starting to specialise a little bit more in the freestyle now and moving away from the backstroke.

"I’m working with Jonty Skinner in Alabama and we’re basically focusing on my freestyle; the power of the stroke and to just be the best that I can be.

"I’m happy with the event I’ve qualified for so far. Extra events would be nice, but I'm totally content with the 50 freestyle qualification time."