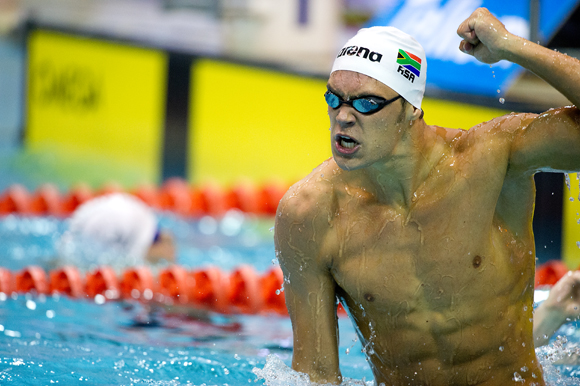 Paralympian swimmer Charl Bouwer turned up the tempo as he posted a thrilling finish to break a world record on the fifth day of the Telkom SA National Senior and Youth Championships at the Newton Park Swimming Pool in Port Elizabeth on Friday evening.

Western Province’s Bouwer brought the crowd to life when he broke his own multi-disability world record in the 1500-metre freestyle S13 category in Friday’s morning heats. The visually impaired athlete’s time was 16min 36.31sec, clipping 0.06 seconds off his previous record.

Meanwhile three more swimmers added their names to the qualification list for the FINA World Championships in Shanghai, China later this year.

Kwa-Zulu Natal’s Charl Crous finished with a phenomenal time of 55.08 in the 100m backstroke, securing his place to World Championships while Gerhard Zandberg came second in 55.58 and Darren Murray third with a time of 55.84.

Wendy Trott won her third gold medal in as many days when she ended with a time of 4:11.97 in the 400m freestyle.

In the evening final multi-disability 50m freestyle race S13, Bouwer claimed the gold in a time of 24.92 ahead of Kevin Paul in 25.85 and Sean Clarke in 26.41, while Craig Groenewald collected the gold in the S14 category of the 50m freestyle with a time of 26.52, Challis Wright was second in 26.72 and Valentino Vergotine in third with 29.37.

Multi-disability golden girls Shireen Sapiro and Yvonne Smith both won their races in the 50m freestyle S10 and S14 categories respectively, while Dianne Saunders won the SB7 50m breaststroke title with a time of 47.55. In the SB5 50m breaststroke race, Paralympian Tadhg Slattery took the gold in 44.77.

In the youth session of the competition, Michaela Barnes was the winner in the 200m backstroke in 2:20.87, while Reynard Wessels took the gold in the 50m freestyle in 23.36 and Marco Husselmann walked away with the gold in the 200m individual medley in 2:06.47.

The synchro 16-18 age group solo gold medal went to Jessica Broughton from the EasternProvince while Nicola David from the WesternProvince claimed the silver with the bronze going to Lara Lindeque from KZN. The senior section winner was Laura Strugnell, Emma Manners-Wood coming in second and Jennifer Woker in third.

What transpired at the SA swimming champs in Port Elizabeth this week is nothing short of a disgrace and an international embarrassment.

A green, murky pool delaying the gala, which also serves as a World championship qualifier, was the talking point for several days.

But as usual, no-one will accept responsibility.

Swimming South Africa (SSA) blamed the Nelson Mandela Municipality and in the end, probably the lowest possible person on the totem pole will take the fall. In this case, a pool attendant at Newton Park.

SSA CEO Shaun Adriaanse said: "Obviously we are not too happy, our stakeholders are not too happy, but also these things happen and no-one could have planned for a filtration pipe to burst and then a pipe that supplies water to the area to burst. It was an unfortunate sequence of events that just happened.”

Yes, these things do just happen, just like SSA bosses meeting behind closed doors in 2011 as allegations of fraud, corruption, misuse of funds and financial mismanagement was drowning the organisation. The Sunday Tribune reported in July 2011 that "Martie Belotti, an executive assistant to Adriaanse, resigned a week ago, but left as her parting shot a letter stating that the organisation was “rotten from the top to the bottom”.

The allegations were conveniently swept under the carpet, Belotti went quiet and the same officials are still running SSA today.

It does beg the question why SASCOC has not placed SSA under administration? Is it perhaps because the SSA President, Jace Naidoo is on the SASCOC board, co-opted by good friend and SASCOC CEO, Tubby Reddy at last year’s rigged SASCOC elections?

SSA has no sponsor, no funds to send our swimmers to the World championships, continued allegations of corruption and maladministration within the organization, but it’s business as usual.

Needless to say, putting any code under SASCOC administration doesn’t achieve anything. It’s just a bully tactic. Just ask Athletics South Africa (ASA), which is now under SASCOC administration for the second time in four years. A SASCOC "buddy” gets to be the administrator, they get well-remunerated and in the middle of it all, the most important people, the athletes, are forgotten. ASA has never recovered from the last SASCOC intervention and so much was hidden, especially with regards the Caster Semenya controversy. Some medical staff should have lost their licenses.

The national swimming champs were always in Durban, until three years ago, when they moved to Port Elizabeth as some current and former SSA officials are from the Eastern Cape and have "good” contacts in the Nelson Mandela Municipality.

But surely, there needed to be a back-up or contingency plan.

Is there only one championship pool in PE and did SSA fly in any pool experts after realizing they had a real problem on day one?

Also, what was SSA trying to hide by not allowing some journalists into the venue?

Times reporter, David Isaacson said: "I have covered SA swim champs at different venues for 15 years. Today, at Newton Park, for 1st time ever, I have been refused entry.”

And EWN’s, Jean Smyth: "I’ve now been asked to remove myself from the pool complex and am being escorted off ‘municipal property’ by security.”

London gold medallist, Cameron van der Burgh on Twitter: "People misunderstand, athletes are not like players. We peak for specific days not week in/week out. You can’t just make trials a week later.”

The Olympic swimmers like Chad le Clos, Roland Schoeman and van der Burgh would have other opportunities to qualify for the World championships if need be, but for the majority, this was their one shot in a pool that didn’t meet FINA requirements.

It’s the responsibility of SSA or the organizing committee to ensure that the facility is up to standard.

So, is SSA going to compensate the swimmers and parents who have broken the bank to pay for flights, accommodation and extra days in Port Elizabeth?

We have insurance which should hopefully be applicable to all of our members affected by this,” said Adriaanse.

Be interesting to see that insurance policy and when it was taken out?

The dreams of South African sportsmen and women are being shattered week after week under the current, corrupt SASCOC regime that turns a blind eye to the sporting codes run by themselves and friends.

The conflict of interests are an outrage and it makes me blue with anger. More blue than the pool in PE, but that’s not difficult. 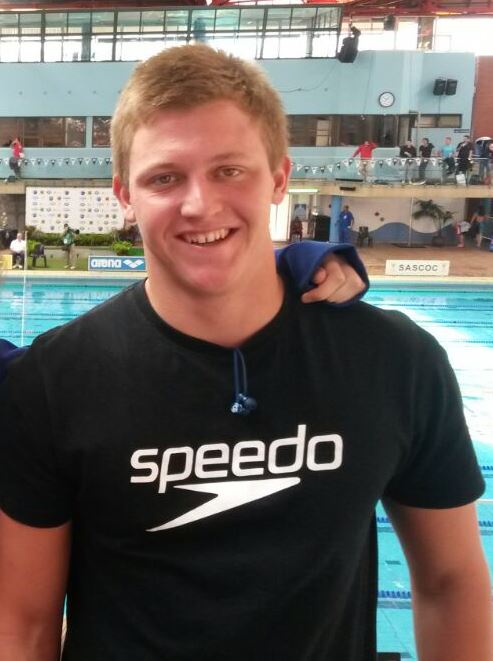 The 42nd Sasol National Winter Swimming Championships proved to be one of the most successful events to date, with an all-time high of 15 records broken. Held at the Penny Heyns Swimming Pool in Sasolburg over the week of 24 to 29 June 2013, swimmers from across South Africa and neighbouring countries participated.

Ude Fuchs from Progress Swimming Club in Polokwane, on a winning streak, broke the record for the 50m backstroke (15 year old), with a time of 28.82. The record was previously set by Wessel Ludick in 2008 with a time of 30.15.

Fuchs said, “To break a record is a great achievement, as training commences at the beginning of the year for the event. I look forward to the Sasol National Winter Swimming Championships, as it is the first gala event of the season and new swimming times are set.”

Tanya Pieterse swimming for Kovsies, Ethan de Wit also with Kovies and Cullen Thomas from Welkom Aquatics each have two new records against their names.

The week-long event, is accredited by Swim South Africa and has been a starting block for many aspiring Olympic swimmers. These include Penny Heyns, Mandy Loots, Chad Le Clos, Terence Parkin and Roland Schoeman, amongst others.

Olympian and gold medalist, Ryk Neethling, who previously competed at the event said, “The Sasol National Winter Swimming Championship was definitely very instrumental in my growth as a swimmer. The competition was tough and it taught me to focus under adversity (cold weather and long days).”

Neethling’s 1987 record for the 50m backstroke (under 10) was almost broken by Zander Landman who missed the record time by 0.04 seconds.

Ivor Zwane, General Manager: Public Affairs, Sasol Sasolburg said, “Sasol believes in building great South Africans through our many sponsorship programmes. We believe that this event will assist with the growth and development of some of the participants to become South Africa’s future champions”.

Ude Fuchs from Progress Swimming Academy led his team to victory in the 200m medley relay setting a new record time of 1:56.64

Cullen Thomas from Welkom Aquatics powered through the 50m backstroke setting a new record time of 31.68