This section is dedicated to the swimmers who became legends - or just well known characters - of South African swimming. The few who achieved international fame are listed in the previous sections.

Since the first swimmers took up scholarships to swim in Oklahoma in 1952, every Springbok swimmer could probably have won a scholarship to an American university. Many did go and became Exiles, never to return and compete locally again,  and many more continue to do so every year.

Note that this is a fairly random list - based partly on what material is available for an article. There are many more swimmers who will be included here as materials are located.

See the articles for other sports for local heroes in those disciplines.

Ted Wearin, an Australian soldier who remained at the Cape after the Boer War, became the first hero of South African swimming, winning titles from 1902 , the triple crown of 100, 220 and 500 in 1904. He was to return in 1911 until 1913, representing Western Province in water polo.

Henry Charteris Hooper is reputedly the first person to swim from across Table Bay from Robben Island to Cape Town. He accomplished this feat for a bet in September 1909, and which was not repeated until 1926, despite many failed attempts.

Ben Jenkins was a Tranvaaler who dominated South African swimming between 1906-1908, until overtaken by George Godfrey. He won the 100, 200 and 500 yards Championship events in those years.

George 'Looper' Godfrey of Durban was the first Springbok swimmer, who competed in the 1912 Helsinki Olympic Games. He dominated local swimming for almost two decades, and played a prominent role in Natal water polo.
Read more

Women were officially first allowed to compete in the South African swimming championships in 1920 - and by August 1920 SAASU had sent Barbara Nash of Cape Town to represent South Africa at the 1920 Olympic Games in Antwerp. She swam in two events - 100 and 300 yards - finishing 5th and 6th in her heats.

Aubrey Nunn competed in the South African swimming championships from 1921 until 1935, when he was still playing water polo for northern Transvaal. In 1923 he made a clean sweep of the freestyle events - winning all three in new South African record times. He was later a member of the Northern Transvaal ASA and SAASU management.

The most famous local heroes were Champions Karen Muir and Ann Fairlie - both local schoolgirls who completely dominated women's backstroke internationally during the late 1960's - without ever being allowed to compete at an Olympic Games or an official Test match.

For 30 years South Africans - and Rhodesians - (South West Africa was always treated as province of South Africa) were banned from international competition. During that time SAASU continued to host an annual national championships, where the Rhodesians competed as a province.

After the annual South African Championships from 1971 - 1980, the two countries held an annual "Test" - where South Africans were able to win the coveted Springbok colours for competing "Internationally".

A number of competitors moved for the USA after winning Springbok colours or national title. There they continued to compete, at a much higher level, for four years while at university. People like Penny Heyns, Jonty Skinner and Peter Williams set world records while at American universities. Sometimes these self-imposed exiles returned to compete at nationals, usually with complete domination of their events against the local favourites. Heyns and Williams returned - Skinner became a US Olympic coach.

Mostly the Exiles did not return however, and were lost to the sports in South South Africa. Tich McLachlan and Aubrey Burer were both multiple South African champions who swam at the 1960 Olympic Games, and attended American universities - never to return. Some - like Annette Cowley and Gary Brinkman tried to get accepted onto teams of other countries without success, largely due to politics. Karen van Helden - who broke Karen Muir's South African records, came back after a brief stay overseas, for a serious career as to study medicine.

This trend created a vacuum which created opportunities for those remained behind to become local heroes.

Brain was a South African champion backstroker from Pretoria. He was a member of the victorious Springbok swim team that won 9 out of 11 medals at the British national championships in 1964.

Geoff Grylls won his Springbok colours against the touring Japanese team in 1962, but he an international swimmer of note in 1964 when he won the 220, 440 and 1650 yards freestyle events at the British ASA nationals.

John won 14 butterfly titles competing at the South African swimming championships between 1964 and 1970. At the 1969 Championships in Cape Town  he beat the world ranked South African Vernon Slovin in both the 110 and 220 yards events.

Lee McGregor is a legend of South African aquatic sports. After placing in a number of events he won his Springbok colours at the 1969 Cape Town nationals, and at the 1970 nationals in Pretoria he won the backstroke and 200 IM events, while in 1971 at Newlands in Cape Town he added the 200 and 1500 freestyle, for a haul of 5 medals. In Port Elizabeth he won three titles, before announcing his retirement, and embarking a round-the-world sailng trip.

In 1977 he made a comeback winning the 100m backstroke - in a new national record time.

But that's just his swimming achievements  - before he started breaking world records in Masters swimming, became a Springbok surf lifesaver and won international races in canoeing - and in 2018 is still winning paddling races - and teaching and coaching paddling.
Read more

Paul Blackbeard was described as the doyen South African swimming. He dominated swimming - as well as life saving - from the late 1960's to the the 1980's - right over the period of time that South Africans were barred from international competition. No longer based in South Africa, he continues to compete and is an international star in aquatic sports.

The Natal springbok breaststroke swimmer won the 100 and 200 events at nationals in 1977.  In 2018 Gail had swum 39 consecutive editions of the Midmar Mile, and was also a multiple World Masters Swimming Champion. With her brother David Mc Carney - butterfly swimmer, triathlete and Comrades Marathon runner.

The sports boycott deprived the world of the what this swimmer might have achieved. One might say that Karen van Helden was the successor to Karen Muir. Both swam backstroke, both also became doctors - and Karen van Helden broke the records that Karen Muir set as world records. Physically they were quite different - the younger Karen had a much smaller physique - but both had the same type of attitude - they refused to be beaten in any race - ever.

Springbok swimmer and lifesaver Annette Cowley attended Settlers High in Bellville, and swam with coach Tom Fraenkel in Constantia. She won 6 titles at nationals in 1983 and 1984, before going overseas on a swimming scholarship.

In 1986 she won both 100m and 200m events at the British ASA nationals and was selected for the GB team to compete at the Glasgow Commonwealth Games. Her selection resulted in a political storm and her being kicked off the British team. She made a come-back in 1992, narrowly missing selection to the Barcelona Olympic Games for South Africa.

Graham Hill the swimmer - and Graham Hill the coach - both are legrnds in South Arican swimming. He won six individual titles at the 1983 South African swimming championships, and later became a coach, taking over the squad of his mother coach Doreen Hill, and producing Olympians that include Terence Parkin and Chad le Clos. 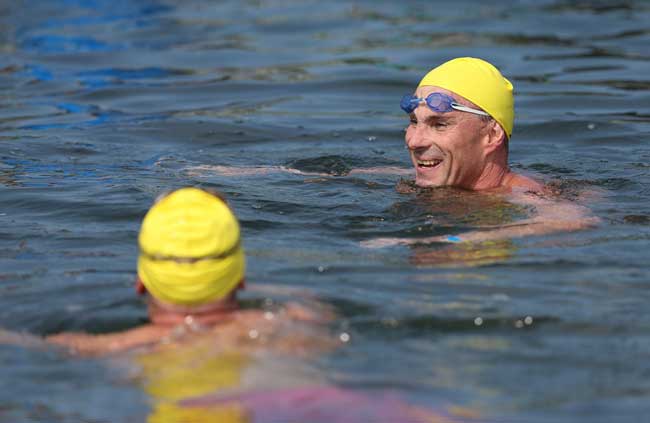