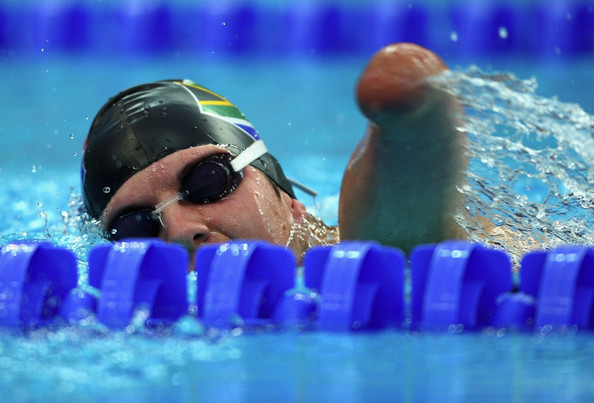 Disabled swimming is part of the sport of competitive swimming. The Paralympics are hosted in the Olympic venue following the conclusion of the Olympic Games. These Games build on a tradition started at the Stoke Mandeville Hospital in England, for soldiers with spinal injuries. The first Stoke Mandeville Games, and from 1960 it was called the Paralympics, and open to non-soldiers as well. The Games were initially open only to athletes in wheelchairs; at the 1976 Summer Games, athletes with different disabilities were included for the first time at a Summer Paralympics.

An unnamed Rhodesia participated in the 1951 event, and a similarly anonymous South African in 1953, when swimming was also added to the list of sports. In 1955 South Africa sent a team and in 1956 won its first gold medal when Neville Cohen won the breaststroke final.

Unfortunately little is known of the early Disabled Swimming Champions -  like Rhodesian Leslie Manson-Bishop, who won 6 gold medals at the Paralympic Games, and Riana van der Schyff - with three Paralympic gold medals and a number of world records to her name. Numerous world records were set by disabled swimmers from South Africa, like Hester du Preez, at the 1978 South African Games in Bloemfontein.

Disabled swimmer Natalie du Toit made history when she competed against able-bodied swimmers in the Olympic 10km open water marathon event at the 2008 Beijing Olympic Games.

At the age of 19, he was involved in a motor accident while travelling with friends to the Kruger National Park. As a result of this accident, he sustained a spinal cord injury and became a paraplegic. In 1956 he won the first gold medal for a South African in the Stoke Mandeville Games, when he won the breastroke event.

Andrew James Scott contracted polio as a baby while living in what was then Rhodesia but he refused to let a little thing thing like this interfere with his dreams of achieving sporting glory and helping others reach theirs.

Scott went on to hold 13 world records in a sporting career spanning 22 years. At age 15 he became the youngest World Record Holder in Paralympic history when he smashed the 50 metre breast stroke record at the 1968 Paralympics in Tel Aviv.

Grey High school pupil Kevin Paul was the poster boy for paralympic swimming when he won a gold medal at the 2008 Beijing Olympic Games. He won silver at the 2012 London Olympic Games and gold again in Rio de Janeiro in 2016.

Tadhg competed as part of the South African Paralympic swimming team at six Paralympic games. His first games in 1992 gave him his first Paralympic gold medal in the 100m breaststroke in a world record time as well as finishing fourth in his heat in the 50m freestyle, eighth in the final of the 50m butterfly, seventh in his heat of both the 100m and 400m freestyle.
Read more

In 2004 Charl Bouwer from Kimberley in the Northern Cape, was only 14 years old when he competed at the Paralympic Games in Athens. His events are 50m/100m freestyle, backstroke and butterfly.
Read more

Craig Groenewald’s Aquatic Passion: Special Olympian, Paralympic Athlete. Craig Groenewald, a 33-year-old Intellectually Impaired Paralympic swimmer. Regarded by many as one of the best disabled athletes in the world, and in 2012 he held three Paralympic world records and is ranked top-three in the world in nearly every swimming event.
Read more

3 x South African Paralympic swimmer - Paralympic gold and bronze medalist, journalist and speaker. Shireen Sapiro was born on 25 January 1991 in Krugersdorp. She is a paralympics swimmer, most notable for her performance at the 2008 Summer Paralympics, winning a gold medal for the 100 m backstroke.