The Springbok swim team at the 1960 Olympics had a surprise result. Laura Ranwell, who had been beaten at the Olympic trials in South Africa by Rhodesian Lyn Cooper, set an Olympic record in the heats of the 100m backstroke. In the final  she finished with a time tied for third place in the women's 100m backstroke, although judged to have finished 4th.

Admittedly she swam in the first heat, beating the world and Olympic record time set by Judy Grinham in 1956, but four other swimmers also beat that time in the rest of the heats. Rhodesians Lyn Cooper, who had beaten Laura at the Olympic trials, and Dottie Sutcliffe, also swam in the Olympic 100m backstroke, but both failed to progress to the final. Lyn Cooper again won the South African championships in 1961 and 1962, while Laura's name does not re-appear in the local swimming press after 1960.

The silver medallist in that race was former South African Natalie Steward,, by then swimming for Great Britain.

Laura was born in Johannesburg on December 13, 1941. In 1960 Laura was selected to compete in the Rome Olympic games. Although she was the least well-known of the three swimmers - she was the one who achieved the most at those Olympic Games.

Tich McLachlan finished 6th in the finals of both the 400m freestyle and 1500m freestyle. Click here to see his results.

Aubrey Burer finished 7th in the 100m freestyle final, but did not progress from the heats of the 400m and 1500m freestyle events. His results are here.

The results of the women's 100m backstroke final were :

Her Olympic times were : 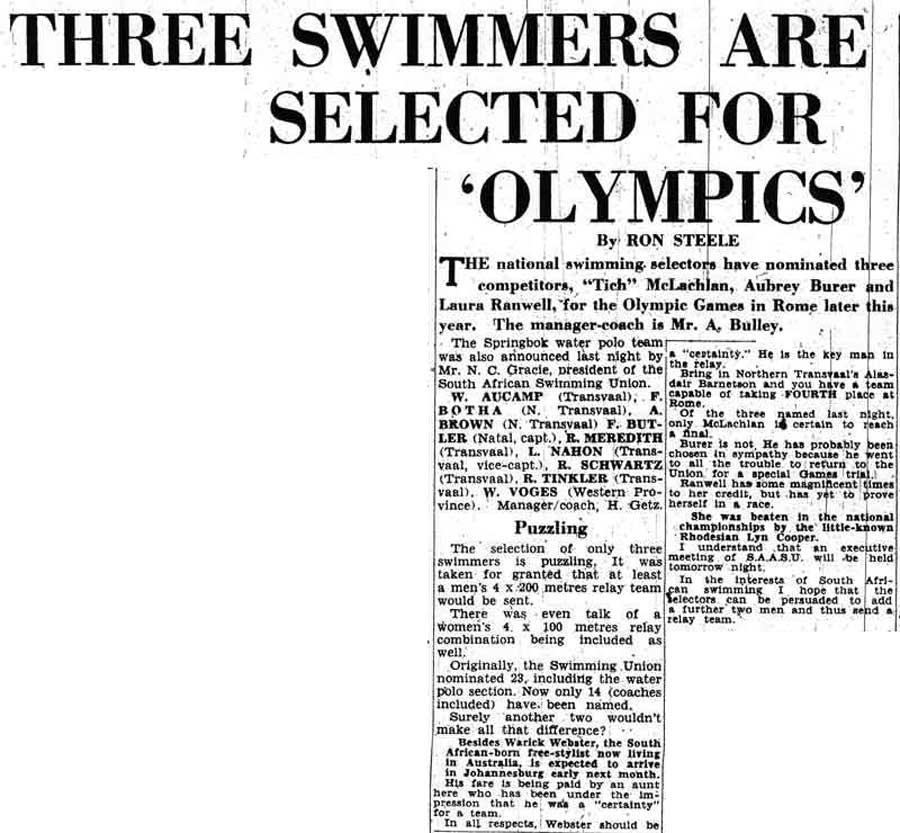 The outdoor Stadio Olimpico del Nuoto was a large arena that had seating for 20,000 fans, thanks to a last-minute addition of temporary seating. Construction of the pool featured some new features that are now common in most pools. Wiring was fed into the starting blocks in Rome to allow all athletes to hear the starter's commands clearly. Underwater lighting made it easier for swimmers to see during nighttime swimming and glass panels allowed for underwater viewing.

The pool seems dwarfed by the spectator seating in the Stadio Olimpico del Nuoto. (Photo courtesy IOC) The pool has become infamous since the 1960 Olympics, hosting the two most controversial swimming world championships in history. At the 1994 edition, the Chinese women nearly swept the medals among speculation that they were doping, a rumor later to be confirmed. In 2009, rubber bodysuits were a major reason why 43 world records were broken during the eight-day meet. Those suits were banned a few months later. The look of the pool has not changed much in 42 years.

The indoor pool has become a very popular place for Romans, especially in the winter months. The tiles on the walls and on the deck have interesting pictographs on them. The indoor pool is used during major meets as a warm-down pool, accessible from the main pool by an underground walkway.