At the time of it's founding in 1899, the first member Provinces of the South African Amateur Swimming Union (SAASU) were Western Province and Eastern Province. After the Boer War ended in 1902 they were joined by the newly conquered colonies of the Orange River Colony (ORC), and Transvaal. Mossel Bay and East London had been sending their own teams, although they later became part of Eastern Province and Border.  The Transvaal soon split into Northern and Southern Transvaal, with Eastern and Western Transvaal emerging later. The northern Cape city of Kimberley became the home of the Griqualand West province. Rhodesia was always one province, as was South West Africa. The Vaal Triangle emerged in the 1970's.

After independence Rhodesia withdrew from SAASU in 1980, and similarly South West Africa in 1990.

By 1995 SAASU no longer existed, and had been replaced by a government-funded and controlled national governing body known as Swim South Africa. Provincial bodies were required to rename in line with government mandated policies, and comply with political priorities like quotas in team selection and a focus on learn-to-swim programmes in township areas. 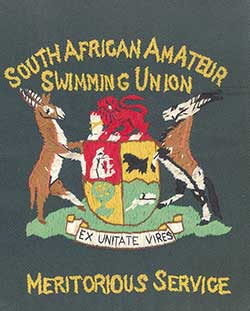 One of the two founding provinces of the South African AMteur Swimming Union.

Based in Cape Town

The largest province, based in Johannesburg, which was later split into five provinces, including the Vaal Triangle.

Pretoria is the main city of this province that strecthed north to the Rhodesian border.

The area east of Johannesburg, down to the Lowveld and the Mozambique border.

West of Johannesburg lies mielieboer territory, including the towns of Klerksdorp and Potchefstroom.

Based in Durban and Pietermaritzburg, Natal has been a leading province in South African swimming.

Based in Bloemfontewin, the province initially compted as the Orange River Colony (ORC).

Windhoek is the major centre in the large former province of South Africa, and Springbok swimmer Dorothea Neumeister was it's most famous aquatic star.

Swimmers came from as far north as Ndola to compete in the South African Championships.

The Vaal Triangle province was created in the 1970's, covering the area between Sasolburg and van der Bijl Park. Coach Kobie Louw produced a crop of Springbok swimmers.