Ken Smith was a former Parktown Boys High pupil and South African 10km open water swimming champion, who was murdered in Pakistan in 2007.

"Kenneth was an extrovert, who lived his live to the fullest," his father added said. "He was sometimes full of nonsense, but that only made him more competitive."

Smith, who swam for the University of Pretoria since 2005, is survived by his father, mother Marilyn, his older brother and two younger half-brothers.

Plea not to judge swimmer who was slain in Pakistan

A memorial service was held at the Parktown Boys’ High School hall in Johannesburg. The service was led by former Springbok breaststroke swimmer, Pastor Herman Nienaber.

In the moments before he died, slain swimmer Kenneth Smith would have remembered the cross he had tattooed over his heart - and turned to God.

This was according to Pastor Herman Nienaber at the 26-year-old Smith's memorial service at Parktown Boys' High School in Johannesburg. Addressing media speculation that Smith had been murdered by the Pakistani drug mafia, Nienaber urged the 150-strong group of mourners - who included Olympic swimmer Natalie du Toit - not to be judgmental.

Aspirant Olympic swimmer Smith's badly beaten body was found dumped near Peshawar, northern Pakistan, wrapped in plastic earlier this month. Pakistani police believe he died on April 8. Nienaber said he knew that many of the mourners had lots of questions about Smith's death.

"With the greatest respect … let's just say some of the speculation was true … I know that if Kenneth's back was against the wall and he was looking death in the eye, he would have remembered the cross that he had put on his chest. He would have looked for grace."

Nienaber said Kenneth's father Neville, who did not speak at the service, told him that Kenneth had become a reborn Christian.

PESHAWAR, Pakistan, April 10. NEVILLE Smith, the Open-Water Coordinator for Swimming South Africa, is en route to Pakistan to claim the body of his son, Kenneth, who was found murdered Sunday in the Pakistani city of Peshawar. The body of the 26-year-old Smith was found in a bag on the outskirts of the city.

Neville Smith indicated that his family was unaware that the young man was in Pakistan and had no idea why he would be in the nation. The family thought Smith was in Dubai in the United Arab Emirates searching for a job as a swimming coach. Kenneth Smith was a three-time 10K open-water champion in South Africa.

Reports have been mixed concerning the cause of death. Some indications have suggested he was poisoned while other reports have indicated Smith was shot in the back of the head. Before being notified of their son's death, the family had last heard from Kenneth two weeks ago. They plan to explore why their son was in Pakistan.

"I am going to fly to Pakistan on Wednesday to try and get the truth from police there," Neville Smith said in the Beeld. "I don't have any idea what my lad was doing there. I will bring his body back to South Africa. There are no cremation facilities in Pakistan. It is also only fitting that he come back to South Africa."

Kenneth Smith was an Olympic hopeful who never missed a Sunday morning church service. Now the 26-year-old's relatives and friends are desperately trying to understand how the swimming star came to be beaten, murdered and dumped in Peshawar, Pakistan - one of the world's most dangerous cities. "It's a mystery to us why he ended up where he did," Kenneth's father Neville told The Star yesterday. "I knew that he had gone to the East but, in the last SMS he sent us in March, he said he planned to travel to Germany to meet up with some friends. I remember feeling relieved that he was going to be spending time with athletes of his own calibre. "As far as I knew, he was heading off to Europe to pursue his career there. He was chasing his dream."

Kenneth Smith's badly beaten body, which was identified by his father using photographs provided to him by the Department of Foreign Affairs, was found wrapped in a plastic bag on Sunday. Smith said the last time he saw his son was on January 20, the day before he left South Africa. "The last time I saw Kenny, the vibe between us was amazing, and that's something I am really happy about. "It's terrible when the last time that you see someone is a negative experience, and you are left with this bad memory, all these things unsaid. My last memory of my son is a good one."

According to Smith, Kenneth had decided to take six months off from training after he aggravated a recurring rotator cuff injury in December last year. "He sold his car so that he could travel overseas. He even told his grandmother that he planned to write a book," he said. Now, said Smith, a Pakistani undertaker was working with the Department of Foreign Affairs to ensure that his son's body was brought home on the next available flight. "We just want him home," he said. Smith said he had been "blown away" by the condolences and messages of goodwill he received from members of the swimming community after news of his son's death broke. "We knew that he was a popular guy, but we had no idea how many lives he had touched or just how much people loved him."

Swimmer Ryk Neethling told The Star he was dumbstruck by the news of Kenneth's death. "I couldn't believe it … I kept hoping that the media reports were wrong," he said, revealing that he had been swimming with Kenneth "for the past ten years". Neethling said he had expressed his condolences to Neville Smith when he saw him yesterday at the South African Senior National Aquatic Championships in KwaZulu Natal. "As much as people want to speculate about what happened to Kenneth, he was a really good guy and there really are no words. It's too sad to even try." Neethling said he knew that Kenneth had recently experienced some tough times. "I tried to organise for him to go over to America on a swimming scholarship, but it didn't work out," he said.

Swimming SA head Shaun Adriaanse described Kenneth as a "definite Olympic prospect" and denied that the swimmer's shoulder injury would have kept him out of consideration for the Beijing 2008 squad. "We were hoping that he would be back in the pool by the end of May. We are all very saddened by what has happened. He was a very polite and well-spoken young man." Danie du Toit, head of the Pretoria University High Performance Centre, where Kenneth lived and trained until late last year, described the young man as a "typical athlete". "He was focused and dedicated. We used to run church services every Sunday morning and he never missed a single one. He was a good guy."

Neville Smith said a memorial service for his son would be conducted at Parktown Boys' High School on Wednesday next week. By Karyn Maughan The Star 11/04/07 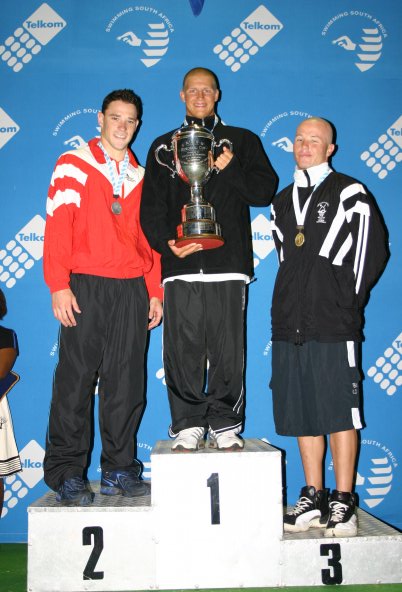 Swimmers Rise to the Challenge at Nahoon

The Telkom Virgin Active Swim Challenge Series proved to be a resounding success at the Nahoon Dam near East London on Sunday with favorable conditions ensuring that fast times were the order of the day.

An enthusiastic crowd witnessed some of the fastest open water swimming ever recorded in South Africa with stellar performances by Kenneth Smith in the 5km event and Border favorite, Mark Randall.

The talented Randall showed just why he is so highly rated in his speed swimming events when he posted a swift 10:55 for the blue ribbon event of the day, the 1km for Men 14 - 30. The previous best was the 11:43 recorded by Troyden Prinsloo at the Telkom Virgin Active Swim Challenge Series event at the Midmar Dam in December.

Mark Volker headed the field out towards the first buoy with Randall, Smith and Tyron Venter in close attendance. Randall surged going into the turn and accelerated hard down the back section of the course to build a lead that never saw him challenged again during the race.

His effort was clinical and what was even more remarkable is the fact that in open water swimming terms, Randall is a novice. The Swim Challenge Series is only his second open water-swimming event in which he has participated.

Smith was philosophical about his effort. His 11:35 is his best effort of the series, while the same applied to Tyrone Venter who was happy with his 11:49

Earlier former triple national champion, Smith rewrote the domestic record books when he posted the fastest 5km time ever swum at a Swimming South Africa sanctioned event in South Africa. His 54,45 destroyed the previous best that is held jointly by Smith and Shaun Dias of 58,38.

The second leg of Swimming South Africa's Open Water Series takes place on Sunday at the Vaal Dam and over 300 swimmers are expected to compete in this popular series.

"We are quite excited as we have a big contingent from Soweto who has entered for this leg of the series. There should be over 100 swimmers from Meadowlands, Soweto and the local township of Eligwa," said Neville Smith, Swimming SA Coordinator of Open Water.

Meanwhile the first event of the series was a success with 155 swimmers competing in the Hazelmere Dam in perfect conditions. Swimmers competed in the 1km, 3km and 10km races."We are swimming the 10km race now at these events, because it is an Olympic event and our open water swimmers can now use these events to improve their times and perfect their races. Previously they only had a few events where they could swim in the 10km race," said Smith.

Ho swam an impressive 3km race and won in 34 minutes 24 seconds, followed by Charl van Zyl and Mark de Swardt.Kathryn Meaklim won the 3km event for women in a time of 37:20, followed by Lauren Bezuidenhout. 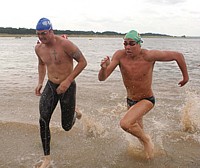 with Olympian Chad Ho at a Midmar Mile finish

Swimming South Africa on Tuesday named a group of open water swimming athletes who will participate in Europe during June.

A senior squad comprising of the talented Shaun Dias (KwaZulu-Natal), Tyrone Venter (Central Gauteng Aquatics) and Velia Janse van Rensburg (Eastern Province Aquatics) will depart for France on June 2 where they will compete in a five kilometre race in Bordeaux on Sunday, June 5. This event forms part of the French Cup.

The squad will then move on to Canet in France where they will compete in the Mare Nostrum series pool events on June 7 and 8. Here they will meet up with national open water champion Kenneth Smith (KZN) and the indomnible Terence Parkin (KZN) who will have competed in Barcelona the preceding weekend.

The squad will end their trip in the United Kingdom where they will participate in a marathon swimming festival which will be held at the Royal Albert Docks in London on June 11 and 12.

The national junior squad will link up with the seniors in London and will compete in the 3km Junior International on the Sunday morning preceding the Fina event.

A group of promising athletes have been invited to participate, at their own expense at the London festival.

The squad will be managed by Neville Smith while Rafiq Bedford is the coach. - Sapa